Saint Epiktetos was one of the 300 Alamanni Saints who came to Cyprus in the 12th century. These were Greeks who lived in Germany and participated in the Second Crusade (1147–1149), yet instead of fighting the Muslims to retake the Holy Land, they went to Jerusalem, venerated the holy places, and went off to live in asceticism in the area of the Jordan. Due to threats from the Muslims and the Catholics, they decided together to leave the Holy Land and go to Cyprus, where they would live separately in asceticism upon their arrival. On their way their ship encountered a storm that nearly was destroyed, but they made it through and landed in Paphos of Cyprus, from which they all bid farewell to each other.

Leontios Machairas, in his history of Cyprus from the 15th century, tells us about 67 of the 300 Alamanni. Regarding Saint Epiktetos, he tells us that he settled in Kazafani, a village in the Kyrenia District of Cyprus. There he found a cave where he lived in asceticism, which is preserved to this day. There one can see his bed made out of stone with a rock for a headrest and his grave. Later, because the locals venerated him so much, they built a church dedicated to him above this cave, where his body was relocated and in 1856 an icon of him was placed.

Today the church of the Saint and his cave is hardly visited because it is in occupied territory by the Turks, who converted the church into a mosque. 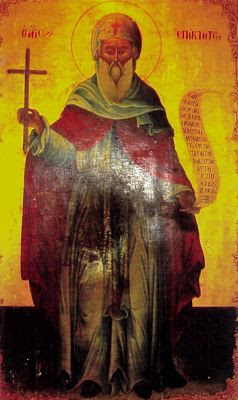 Saint Epiktetos is known as a wonderworker because of the many miracles attributed to him. Below are a few examples:

1. There was once a young man from Paphos who was blind, and day and night he prayed to receive back his sight. One night as he was praying he saw Saint Epiktetos in a vision, who told him his prayers have been heard, and that he was to go to his home where he was to wash his face with his water and after this his desire would be fulfilled. When the young man asked where his house was, the Saint replied that when he arrived in Kyrenia he would meet a priest, whose name was Papa-Constantine, and he would direct him to the house. All this was done the next day, and when he was led by the priest to the cave of the Saint, the priest showed him the spring from which to wash his eyes. When he went to the church and kissed the icon of the Saint, he was immediately able to see again. For this he thanked God and Saint Epiktetos.

2. In Kakopetria there lived a family who had a 15 year old child that was possessed by a demon. They sought to have him healed in various ways, but daily he became worse. He also refused to wear any clothing. His parents prayed with tears. One day his mother was praying on her knees as her son was in the other room having a horrible fit, and she saw a vision of the Saint. He told her that her son will become well if she only brings him to his house east of Kyrenia. The next morning she and her husband and her child set off for the house of the Saint. When they arrived at the cave they saw a priest who led them inside. There the priest took the rock pillow that was used by the Saint and made the sign of the cross with it over the child three times. When this was done the child screamed then fell to the ground as if dead. A few seconds later the child recovered and was as if he had just woken up from a deep sleep. Fully recovered the boy went up to the church, venerated the icon of the Saint with prostrations, and glorified God and His Saint.

3. There was once a family from Peristerona who had a child that was paralyzed, bedridden with pain. The parents spent a lot of money on doctors, but no one could help him. They even left Cyprus looking for doctors abroad, but nothing. One day as the mother was praying with tears on her knees, an old man appeared before her and told her to stop weeping, since God had heard her cries and sent him to heal her child. He told her to bring her child to his house on Sunday in the village of Agios Epiktetos, and she would receive what she longed for. After telling her husband, she prepared a prosphoron and went to the house of the Saint on Sunday. After the Divine Liturgy in the church they went down into the cave, where the priest made the sign of the cross with the rock pillow of the Saint three times over his chest and back. Then the child went from being able to move his legs, to being able to get up and walk. 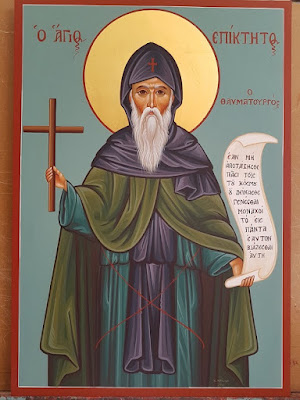 Apolytikion in the Third Tone
With divine asceticism, you attained strength, and pleased Christ, venerable one, God-bearing blessed Epiktetos. And having been glorified with the grace of the Spirit, rescue us from dangers and tribulations. Venerable Father, entreat Christ God, to grant us the great mercy.

Megalynarion
Called by the grace of God, Father Epiktetos, as His august servant, protect and cover us, from all abusive spite, those who call on your help. 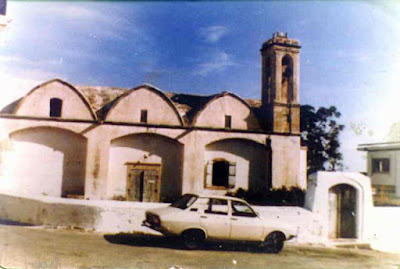 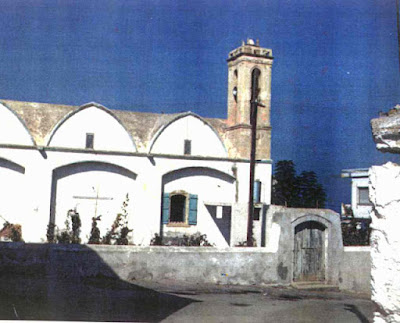