Homilies on Holiness and the Saints - The Prophets (Metr. Hierotheos of Nafpaktos) 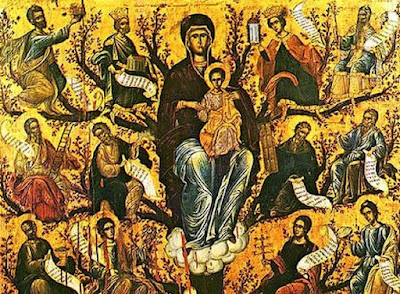 The Prophets
By Metropolitan Hierotheos of Nafpaktos and Agiou Vlasiou
People who unite with God and receive His holy energies are also called Holy [or Saints]. God is holy in the absolute sense, while the people who commune with Him are called holy in a relative sense, because they commune with Him.

Among the saints are the Prophets, who lived in the Old Testament and led the people according the command of God. Such Prophets were Isaiah, Jeremiah, Daniel, Elijah, Samuel, Moses, etc.

The word Prophet comes from two words "pro" and "fanai", and denotes the one who predicts and reveals the future, but also teaches at the same time. God reveals His will to the specific Prophet, who said: "Speak Lord, for your servant hears" and then this man conveyed God's will and command to the people, saying: "Thus saith the Lord". "Thus saith the Lord" and "Speak Lord" are what denotes the work of the Prophet. Because the Prophets saw God, the pre-incarnate Word, that is why the people called them, as it appears in the life of the Prophet Samuel, "seers" and "visionaries".

The work of the Prophets was very great. They conveyed the will of God to the people, they discerned error from truth and with truth guided the people, they rebuked the people and the rulers when they turned away from God and led them to repentance, they spoke of the coming Messiah, they were preparing the people to receive him. So their work was great and wonderful.

As great and responsible as their work was, their difficulties were many. The people usually do not want reasons to oppose their passions, which is why many Prophets died as martyrs, as the Apostle Paul describes in his letter to the Hebrews.

When someone presented himself as a Prophet, but did not speak in the name of God, but with his own thinking and his own imagination, he was called a false prophet.

Prophets did not exist only in the Old Testament, but also in the ancient Church and their position was great and honorable among the members of the Church, that is, their position was after the Apostles. And according to some interpretive analysis, the prophets in the ancient Church were called theologians, those who saw God in the uncreated light and then simply guided the Christians.

Saint Gregory of Nyssa teaches that heresy prevails where there are no Prophets, that is, there are no people who have personal communion with God to simply guide the people and discern between uncreated and created energy, between the energy of God and the energy of demons.

And today there are such blessed people, who have the place of the Prophets in the Church, whom we must seek in order to be properly guided on the path to the Kingdom of God, on the path of our salvation.
Source: Translated by John Sanidopoulos.
John at 4:41:00 PM
Share
‹
›
Home
View web version