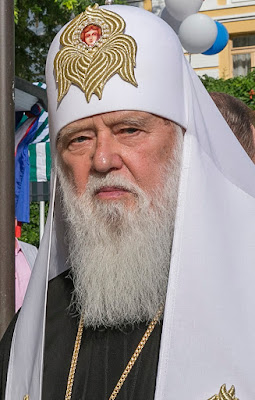 I will now dwell on some other historical facts, in order to give rest, or rather strain, to your frustration.

* The Ukrainian titular patriarch Filaret (who co-ordained Kirill), who was a fellow candidate for Patriarch with the late Patriarch Alexy, was punished two or three times by the religious policies of the Russian Patriarchate, which serves the Russian Federation policies. Regardless of the much-publicized Russian "other", primarily and mainly the dynastic political-religious criteria prevailed.

That is why, when Moscow agreed and signed that it would participate in the Great Synod of Crete, in just a few months it vertically differentiated, in order to demonstrate its power. In fact, Hilarion, the Metropolitan of Foreign Affairs (this is a sample of a title of secularization), who stood by the Patriarch in that final agreement, was found in June 2016 in the Seychelles. Urged by the Metropolitan of the Seychelles, Demetrios, whenever he wanted to come to liturgize there in Seychelles because Demetrios was going to Kolimvari in Crete, Hilarion replied: "I came for a holiday in the Seychelles, not to liturgize!"

Let our Russian brethren choose and receive what suits them. In one way or another, they give off a scent of secular decay and not of ecclesiastical decency.