Homilies on Holiness and the Saints - The Fathers of the Church (Metr. Hierotheos of Nafpaktos) 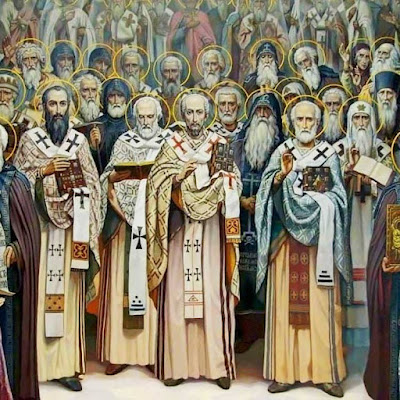 The Fathers of the Church

The word "fathers" is also known in everyday life, since it means those who give birth to children and are the head of every family. This word, conveyed in ecclesiastical life, signifies those Clergy who give birth to spiritual children in the life according to Christ and guide them to grow spiritually. The Apostle Paul, writing to the Corinthians, told them that even if they have many teachers according to Christ, they do not have many fathers, because their father was the one who gave birth to them with his teaching, which was the teaching of Christ: "For though you might have ten thousand teachers in Christ, yet you do not have many fathers; for in Christ Jesus I have begotten you through the gospel”(1 Cor. 4:15).

Of course, in the absolute sense of the term "Father", He is the First Person of the Holy Trinity, from whom the Word is born before all ages and the Holy Spirit proceeds, and of course through the Holy Triune God Christians are reborn. Christ many times in His teaching and prayers called the First Person of the Holy Trinity "Father", as well as taught us to call Him by that name. That is why in the Lord's Prayer we say: "Our Father who art in heaven ...".

"Fathers" in the relevant sense are also what Clergy are called, those who have in them the energy of the Triune God and with this Grace regenerate people and teach them in their spiritual life. Fathers par excellence are the Bishops and then, with their permission, the Presbyters who put into practice this work by the power of God. They do not have their own spiritual children, but God entrusts to them, through the Church, His own children to educate them in the life according to Christ with His own energy.

In the most special sense, Fathers, and in fact Great Fathers, are the Clergymen who in difficult historical moments for our Church, with their wisdom, their knowledge, their deification, separated the truth from error and defined the Orthodox faith, attending the Local and Ecumenical Synods. They, in the Holy Spirit, established the terms of the Ecumenical Synods, the so-called dogmas, they established the sacred Canons for the proper functioning of the Church, they determined the ways of healing the sick members of the Church. With their theology, their teaching, their pastoral guidance, their prayers, they have performed and continue to perform a great work in the Church of Christ.

The Great Fathers of the Church had three special gifts. One was their holiness, which is associated with deification, the other was that they had extraordinary mental gifts, and the third was that they had acquired a great deal of education and thus were able to help the Church in difficult situations when various heretics wanted to distort the teaching and the life of Christ.

We, the clergy and the laity, must study their writings, embrace their teachings, try to coordinate with it, ask for their intercessions, and become Fathers in the modern difficult times of ecclesiastical life. Above all, the Clergy should become good spiritual fathers to their flock, and Christians should seek this blessed spiritual and charismatic fatherhood in order to mature spiritually.