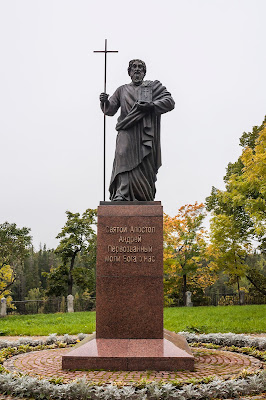 * Russianism is slowly "gnawing" at the historical course of Orthodoxy, by any means of communication. This is how the obsession with maintaining the "Minister of External Affairs" of the Russian Patriarchate is explained, something that began in the Stalinist period and today is entrenched.

* This is how the propaganda is explained in the Western world and in America, with publications in English that advertise the strange Pan-Slavic idea that Greek-speaking Orthodoxy has long since been extinguished as a language, and that Orthodox spirituality is expressed today by the Slavic language and especially in the Russian world. It is at least one wretched action (which fights against the mystery of the Incarnation and Pentecost and makes useless the last lines of the Creed). In these English-spoken publications of the foreign policy of the Russian side, Alexandros Papaderos gave a reply in English.

* Similarly to Alexander the Great and Skopje, we also have in the Russian Church myths about Apostolic roots. On the island of Valaam, outside the monastic complex, is the elevated statue of the Apostle Andrew, and they say verbally how the First-Called Apostle had arrived even there.

We do not excluded that the love of an abbot or bishop towards the Apostle may be reflected here, but as a side note the monastics declare that the Apostle had reached there! In other words, an untruth is used, perhaps for spiritual and pastoral purposes, to inspire monastic missionaries. However, Russian propaganda does not allow us to have "good thoughts" in this respect.