Is There A Liturgy of Saint James? 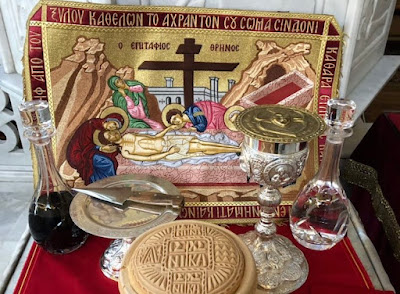 By Archimandrite Vasilios Bakoyiannis
At the beginning of our Church there were no priestly service books like the Hieratikon which contained the Divine Liturgy.

The Apostles performed the Mystery on the basis of what they had seen from Christ (Saint Sophronios of Jerusalem, P.G. 87:3982).

They "framed" it with their own personal eucharistic prayers. Peter had his, Andrew his, John his, James his, etc.

The post-Apostolic Fathers did the same thing. We thus had many liturgies and many extensive prayers, something that forced the priests to "cut them short". "Do not, because of human weakness, hasten through or cut short the prayers," exhorted Basil the Great in his "Commands to Priests".

Basil the Great, in order for there to be uniformity in the Church, but also a shorter Liturgy, took the initiative and made the Divine Liturgy in his name, based on the "material" that existed in the Divine Liturgies in use.

The same was done by Saint John Chrysostom, based on the Liturgy of Basil the Great (Saint Proclus of Constantinople, P.G. 65:849-852).

Hence the Liturgies that had been used up until this time fell into disuse, and became lost. Therefore, there is no genuine, actual Liturgy of James.

The way in which the "Liturgy of James" is performed in our day has nothing to do with how it was done in the ancient Church.

And they understood, Bishops and Priests, as members of the same body (the Church), the one had need of the other.

The laity received the Body of Christ from the Bishop, and the Blood from the Priest, in a special "cup".

They remained on their knees(!), until the last believer communed, and the exhortation: "Arise! Having partaken of the divine, holy, pure, immortal, heavenly, life-creating, and awesome Mysteries of Christ, let us worthily give thanks to the Lord."

The sin of the "Liturgy of James" is that things happen that never happened in our Church.

For example, in the beginning the Divine Liturgy took place "in secret", far from the eyes of the "uninitiated", however, with that of James everything is done in the open, where it can be seen by everyone!

The Altar or Holy Table is consecrated to perform the Mystery, however, in the Liturgy of James, the Altar is despised and a small table is used!

The antimension does not replace the Altar in any way, otherwise, why should the Altar be consecrated?!

Oikonomia is applied when it is impossible to apply akriveia. Otherwise, it is not oikonomia, but arbitrariness.

In our days, the following has emerged: Divine Liturgy in the halls(!), and in the courtyards(!), and in the schools, "freezing" the consciousness of teachers and students with this unprecedented sight.

And this has nothing to do with the sick or the paralyzed who are unable to come to the church! If only this was it.

The hall or the courtyard, where the Mystery takes place, and Christ is revealed, are afterward handed over to their daily use, as if nothing had happened!

With the "forum" we have taken, "zealots" will be found to liturgize in supermarkets, cafes, and I do not know where else, with the reasoning "if the people do not go to the church, let the church go to the people!"

People are benefited when we keep with reverence what has been handed down to us, not when we despise it.

In our worship there are wrong things that take place. For example, in the Greek Church, there is one Archbishop, but we also make every Bishop into an Archbishop; "On behalf of our Archbishop..." we say at every Divine Liturgy.

Also, if someone murders their mother-in-law, their wife, commits suicide, at their funeral we chant: "Blessed is the way in which you walk today...."

Also, the faithful of our Church venerate horses, dragons, demons (in the icons of Saint Demetrios, Saint George, Saint Haralambos, Saint Marina, etc.) while we sing.

There are many other things which will make you pluck out your eye.

Therefore, instead of correcting the bad texts of our worship, we set fire to the good texts! What is going on?