Saints Barnabas and Hilarion the Wonderworkers

Unfortunately, we know very little about Saints Barnabas and Hilarion. Leontios Machairas in his Chronicle, as well as Kyprianos in his History rank the Saints among the 300 so-called Alamanni, who went to Cyprus after the Second Crusade and practiced asceticism in various places. However, this opinion, with that given to us both by tradition and by the synaxarion of the Saints, conflicts. There it explicitly mentions that the Saints came from Cappadocia and even lived in the years of the reign of Emperor Theodosius the Younger (408-456 AD). Both Saints were from noble families and served in the emperor's army, in which they were distinguished for their stature, their bravery and their whole life in general.

Despite the bright future that was opening up to them in their service, the love of Christ made them leave the army and its glory and they dedicated themselves to Christ. So they went to the desert where they labored in prayer, the study of Scripture, asceticism, and the acquisition of virtue. Miracles were performed daily at their place of residence in the faithful hearts that visited them, to hear their advice and to be strengthened. Miracles small and great. To the sick they were physicians, to the afflicted they were a source of hope, to those in sorrow they were a consolation. This is how the Saints spent their whole lives. But even when their tired bodies rested under the earth with the surrender of their holy souls to the Lord, their miraculous power did not stop. One such miracle is their arrival in Cyprus, to continue there to be agents of the grace of God. 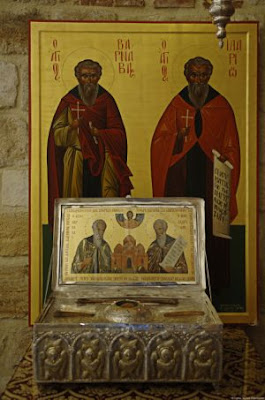 One night in Soloi, a pious man named Leontios saw the two Saints in a dream, and said to him: "Brother, rise up and take your pair to a place called Stomation, which will lead you to us." And when he asked them who they were and where and how they came to the island, the Saints revealed everything in detail - their homeland, and their names and their whole life. They also explained to him that they came to the island by the power of God in order to bring help to its people and health to its sick.

Leontios immediately set out to do as the Saints ordered. He took his pair of oxen and went to the place indicated to him, "the Stomation" (Stoma), which is located on the beach of Morphou, approximately where the river Serrachis flows. Indeed, as he looked towards the end of the beach he saw there a wooden box. With reverence he approached the case, tied a rope around it, and tried to drag it out from where it was with the oxen, but the box would not move an inch. After trying multiple times, Leontios knelt and prayed to God and the Saints to show him what to do. 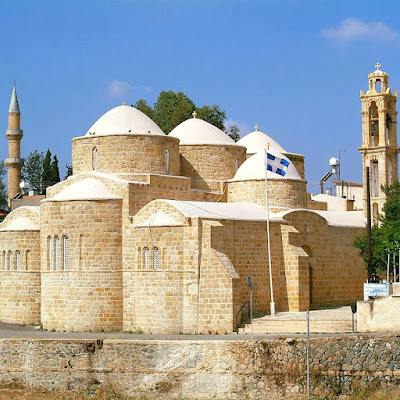 The next night the Saints appeared to him again. They told him: "Brother, we did not tell you to bring your pair of oxen, but your two children." He therefore took his two boys and returned to the place the chest was. After praying, the father and two children were able to lift up the chest and take it to the place indicated by the Saints, to Peristerona. From the moment they arrived and placed the chest on the ground, the miracles began. This is because within this chest was contained the sacred relics of the two Saints.

So many miracles took place that it would be difficult to count them all. The blind were able to see, the demonized were exorcized, those who suffered from fever got well, those who suffered from various diseases were healed, those who were paralyzed for years were able to move and walk. Not only from neighboring villages but from throughout the island people came to receive the blessing of the Saints who had just arrived to their island by the power of God. Soon after a beautiful church which stands till this day was erected to house the treasure of the sacred relics.
John at 1:59:00 PM
Share
‹
›
Home
View web version