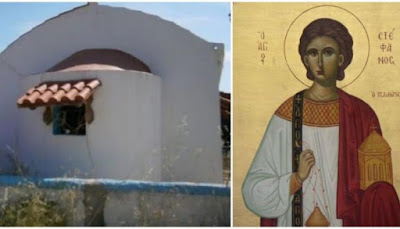 On the Greek island of Kos, in the village of Amoniou, lies a chapel dedicated to Holy Protomartyr and Archdeacon Stephen. It is built next to the ruins of an ancient monastery that was dedicated to Saint Stephen. This is the story of how the chapel came to be built, and which led archaeologists to discover the ruins of the monastery.

In Sydney, Australia lives the family of Anna Kourgiali, of the family Zamagia, who has two sons.

One morning in 1982 the youngest son, who was then fourteen, left for school. Suddenly something happened that he was unable to speak and unable to understand anything, then he lost consciousness and fell into a coma. An ambulance came and brought him to a hospital, where the struggle began to save his life.

Fifteen days passed, with the best doctors working on the case, but they were still unable to revive the boy from his coma. They informed the parents that at that point there was practically no hope for the child, and he would likely remain in a coma, a vegetative state, for the rest of his life.
In despair and sorrow, the mother sat beside the bed of her sick child, and being utterly exhausted, she fell asleep. In a dream she beheld a young man, who told her: "I am Saint Stephen, and can be found in Amoniou. If my monastery is built there again, your child will be made well."

The mother then woke up, and with great longing to save her son, she cried out: "I will build the Monastery of Saint Stephen!"

Then the parents, the doctors and the nurses gathered, who knew the state of the child, and they all did their crosses and proclaimed: "Miracle! Miracle!"

Seeing that the boy had fully recovered, the parents were allowed to take him home. 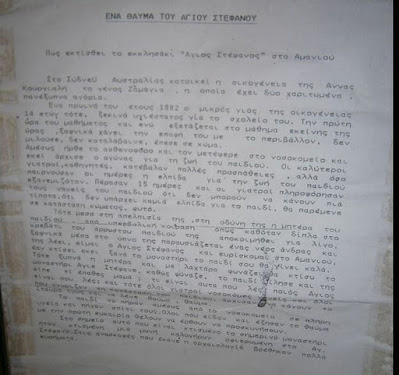