Excerpt from Letter LII: to Nepotian
Once David had been a man of war, but at seventy age had chilled him so that nothing would make him warm. A girl is accordingly sought from the coasts of Israel — Abishag the Shunamite — to sleep with the king and warm his aged frame. Does it not seem to you — if you keep to the letter that killeth — like some farcical story or some broad jest from an Atellan play? A chilly old man is wrapped up in blankets, and only grows warm in a girl's embrace. Bathsheba was still living, Abigail was still left, and the remainder of those wives and concubines whose names the Scripture mentions. Yet they are all rejected as cold, and only in the one young girl's embrace does the old man become warm. Abraham was far older than David; still, so long as Sarah lived he sought no other wife. Isaac counted twice the years of David, yet never felt cold with Rebekah, old though she was. I say nothing of the antediluvians, who, although after nine hundred years their limbs must have been not old merely, but decayed with age, had no recourse to girls' embraces. Moses, the leader of the Israelites, counted one hundred and twenty years, yet sought no change from Zipporah.

Who, then, is this Shunamite, this wife and maid, so glowing as to warm the cold, yet so holy as not to arouse passion in him whom she warmed? Let Solomon, wisest of men, tell us of his father's favorite; let the man of peace recount to us the embraces of the man of war. "Get wisdom," he writes, "get understanding: forget it not; neither decline from the words of my mouth. Forsake her not and she shall preserve thee: love her and she shall keep thee. Wisdom is the principal thing, therefore get wisdom, and with all thy getting get understanding. Exalt her and she shall promote thee. She shall bring thee to honor when thou dost embrace her. She shall give to thine head an ornament of grace: a crown of glory shall she deliver to thee."

Almost all bodily excellences alter with age, and while wisdom alone increases all things else decay. Fasts and vigils and almsdeeds become harder. So also do sleeping on the ground, moving from place to place, hospitality to travellers, pleading for the poor, earnestness and steadfastness in prayer, the visitation of the sick, manual labor to supply money for alms-giving. All acts, in short, of which the body is the medium decrease with its decay.

Now, there are young men still full of life and vigor who, by toil and burning zeal, as well as by holiness of life and constant prayer to the Lord Jesus, have obtained knowledge. I do not speak of these, or say that in them the love of wisdom is cold, for this withers in many of the old by reason of age. What I mean is that youth, as such, has to cope with the assaults of passion, and amid the allurements of vice and the tinglings of the flesh is stifled like a fire among green boughs, and cannot develop its proper brightness. But when men have employed their youth in commendable pursuits and have meditated on the law of the Lord day and night, they learn with the lapse of time, fresh experience and wisdom come as the years go by, and so from the pursuits of the past their old age reaps a harvest of delight. Hence that wise man of Greece, Themistocles, perceiving, after the expiration of one hundred and seven years, that he was on the verge of the grave, is reported to have said that he regretted extremely having to leave life just when he was beginning to grow wise. Plato died in his eighty-first year, his pen still in his hand. Isocrates completed ninety years and nine in the midst of literary and scholastic work. I say nothing of other philosophers, such as Pythagoras, Democritus, Xenocrates, Zeno, and Cleanthes, who in extreme old age displayed the vigor of youth in the pursuit of wisdom. I pass on to the poets, Homer, Hesiod, Simonides, Stesichorus, who all lived to a great age, yet at the approach of death sang each of them a swan song sweeter than their wont. Sophocles, when charged by his sons with dotage on account of his advanced years and his neglect of his property, read out to his judges his recently composed play of Oedipus, and made so great a display of wisdom—in spite of the inroads of time—that he changed the decorous silence of the law court into the applause of the theatre. And no wonder, when Cato the censor, that most eloquent of Romans, in his old age neither blushed at the thought of learning Greek nor despaired of succeeding. Homer, for his part, relates that from the tongue of Nestor, even when quite aged and helpless, there flowed speech sweeter than honey. 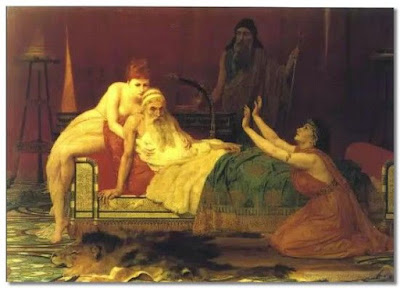 Even the very name Abishag in its mystic meaning points to the greater wisdom of old men. For the translation of it is, "My father is over and above," or "my father's roaring." The term "over and above" is obscure, but in this passage is indicative of excellence, and implies that the old have a larger stock of wisdom, and that it even overflows by reason of its abundance. In another passage "over and above" forms an antithesis to "necessary." Moreover, Abishag, that is, "roaring," is properly used of the sound which the waves make, and of the murmur which we hear coming from the sea. From which it is plain that the thunder of the divine voice dwells in old men's ears with a volume of sound beyond the voices of men. Again, in our tongue Shunamite means" scarlet," a hint that the love of wisdom becomes warm and glowing through religious study. For though the color may point to the mystery of the Lord's blood, it also sets forth the warm glow of wisdom. Hence it is a scarlet thread that in Genesis the midwife binds upon the hand of Pharez—Pharez "the divider," so called because he divided the partition which had before separated two peoples. So, too, with a mystic reference to the shedding of blood, it was a scarlet cord which the harlot Rahab (a type of the church) hung in her window to preserve her house in the destruction of Jericho. Hence, in another place Scripture says of holy men: "These are they which came from the warmth of the house of the father of Rechab." And in the gospel the Lord says: "I am come to cast fire upon the earth, and fain am I to see it kindled." This was the fire which, when it was kindled in the disciples' hearts, constrained them to say: "Did not our heart burn within us while He talked with us by the way, and while He opened to us the Scriptures?"

To what end, you ask, these recondite references? To show that you need not expect from me boyish declamation, flowery sentiments, a meretricious style, and at the close of every paragraph the terse and pointed aphorisms which call forth approving shouts from those who hear them. Let Wisdom alone embrace me; let her nestle in my bosom, my Abishag who grows not old. Undefiled truly is she, and a virgin forever for although she daily conceives and unceasingly brings to the birth, like Mary she remains undeflowered. When the apostle says "be fervent in spirit," he means "be true to wisdom." And when our Lord in the gospel declares that in the end of the world — when the shepherd shall grow foolish, according to the prophecy of Zechariah — "the love of many shall wax cold," He means that wisdom shall decay. Hear, therefore — to quote the sainted Cyprian — "words forcible rather than elegant."
John at 3:55:00 PM
Share
‹
›
Home
View web version