The Woman Who Was Near Death and Saved by Saint Markella 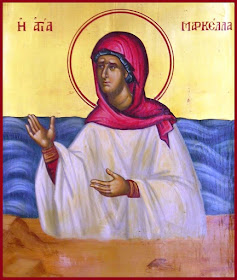 In 1785 some people started from Chora on the island of Chios to go to their village in Volissos.
On the way, however, they were caught in a snow storm in a deserted and uninhabited place, so that a woman fainted and fell down like dead.
The others who were with her since they could not offer her anything, picked her up and put her in the cell of the Church of Saint George, which was in this mountainous area called Flori.
The woman was at the throes of death, and so they left her there alone since they too were not safe at this point.
Eventually, the rest of them managed to reach their homes safe after facing great danger.
In Volissos, they told her husband what exactly happened and where they left his wife dying.
He, however, did not lose his courage, and began to warmly entreat Saint Markella, that with the other miracles she has performed, to do the same for her, that is, to save his wife.
The miraculous Saint heard the man entreating her warmly and introduced herself to his wife and put her in a corner of the cell where there was a manger and it was warmer, and as the woman said, it seemed to her that she gave her a container of water and she drank.
The snowfall, however, lasted nine days, and many believed that she was now dead and they waited for it to stop in order to go and bury her.
So, when the bad weather stopped and they went to bury her, they found her to be well and healthy and strengthened by the water given to her by Saint Markella!