Commemoration of the Miraculous Appearance of the Mother of God at Pochaev Lavra, which Saved the Monastery from the Assault of the Tatars and Turks (1675) 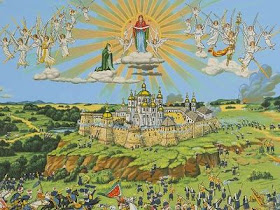 The celebration in honor of the Pochaev Icon of the Mother of God on July 23 was established in memory of the deliverance of the Dormition Lavra from a Turkish siege on July 20-23, 1675.
In the summer of 1675 during the Zbarazhsk War with the Turks, in the reign of the Polish King Jan Sobesski (1674-1696), regiments composed of Tatars under the command of Khan Nurredin via Vishnevets fell upon the Pochaev Monastery, surrounding it on three sides. The weak monastery walls and its stone buildings did not offer much defense against a siege. The abbot Joseph Dobromirsky urged the brethren and laypeople to pray to their heavenly intercessors: the Most Holy Theotokos and Saint Job of Pochaev.
The monks and the laypeople prayed fervently, prostrating themselves before the wonderworking icon of the Mother of God and the reliquary with the relics of Saint Job. At sunrise on the morning of July 23, as the Tatars were planning an assault on the monastery, the abbot ordered an Akathist to the Theotokos to be sung. At the opening words, “O Queen of the Heavenly Hosts,” the Most Holy Theotokos suddenly appeared over the church, in “an unfurled gleaming-white omophorion,” with angels holding unsheathed swords. Saint Job stood beside the Mother of God, bowing to her and beseeching her to defend the monastery.
The Tatars believed the heavenly army was a vision, and in confusion they began to shoot arrows at the Most Holy Theotokos and Saint Job, but the arrows fell backwards and wounded those who shot them. Terror seized the enemy. In a flight of panic and without looking, they trampled upon and killed each other. The defenders of the monastery attempted pursuit and took many prisoners. Some of the prisoners afterwards accepted the Christian faith and remained at the monastery thereafter. 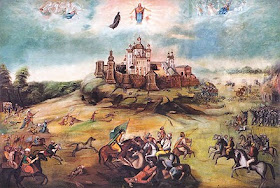 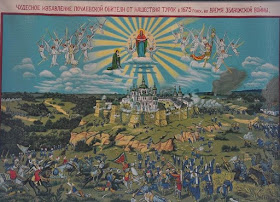 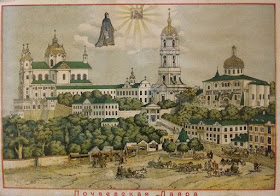 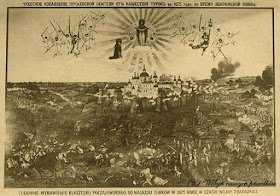 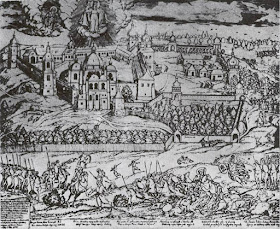