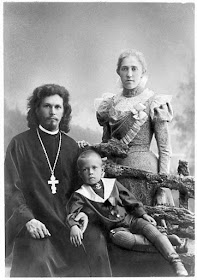 Father Michael's wife heard about everything and mourned. She spoke in detail about everything to the parishioners. A few days later, the authorities warned her: "If you talk about your husband, you will go there yourself."
The veneration of Father Michael Nakaryakov as a holy martyr began with Bishop Theophanes (Ilmensky), who, after the assassination of Archbishop Andronik (Nikolsky), headed the Perm diocese. Bishop Theophanes (Ilmensky) celebrated an all-night vigil service in Perm, at which he remembered Father Michael as a holy martyr: "for whom not only we pray, but that he also pray for us before God."
After the all-night vigil, Bishop Theophanes called forward  the son of Father Michael, Nicholas, who served as a deacon in the Trinity Church in Perm, and said: "In memory of your martyred father you will be ordained a priest. Follow your father." After the ordination of Father Nicholas he served in the village of Koltsovo. Often on church business, he visited Perm, where his mother and sisters moved. On one of these trips, the village of Koltsovo was captured by the Reds. "Where is the priest? Did he run away with the whites?" they asked the parishioners. “No, he went to Perm on church business,” the parishioners tried to convince them. "No, he ran away!" - the Red Army men insisted.
Seeing that the Bolsheviks were determined to arrest the priest, the parishioners sent a trusted person to Perm to warn Father Nicholas, so that he does not return to the village, since the Reds were going to shoot him and his house had already been plundered. For Father Nicholas, this news turned out to be a great shock. In the morning he went to the temple and, stopping among the people, prayed for a long time with tears. After the service, a nun approached him and asked: "Father, what are you crying about?" He was then twenty-four years old, he looked younger than his years, and she wondered why a young priest could cry so bitterly. "How can I not cry? I came to Perm on church affairs and then I learned that my house in the village was taken away, my property was plundered and they wanted to shoot me." The nun suggested that Father Nicholas go with her to the Bakharev Monastery, which at that time was left without a priest. He agreed. The abbess of the monastery found an apartment for him and his family, collected the necessary clothes, and found something to furnish the apartment with. Father Nicholas liked it and began to serve.
During the fast of the Dormition in 1919, the priest was driving from Perm to the monastery; the path lay through the forest. Here two Red Army men came out to meet him. “Priest, get out of the cart,” they said as they stopped him. "We will shoot you now." Silently Father Nicholas came out, they stood opposite each other, raised their rifles to shoot, and one of the Red Army men said: "No, get on the cart, go, we don't need you." Silently Father Nicholas got into the cart and drove off. The shock was, however, so strong that, upon arriving at the monastery, he fell seriously ill. The disease developed rapidly, accompanied by severe headaches. On the third day after arriving at the monastery, he died.
After the martyrdom of Father Michael his family was persecuted by the authorities for a long time, deprived of food ration cards, and did not allow the children to go to school, but the family lived comfortably through the prayers of the martyr. The Lord did not leave them. It used to be that one of the children or the mother would leave the house in the morning, and on the threshold was a bag of food, powdered with snow, with a note.
Some parishioners commemorated Father Michael as a martyr and turned to him in their prayers. One of the students of the parish school where Father Michael became a priest, was arrested during the persecution, and in prison, seeing the inevitable approach of death, began to fervently pray to the martyr so that he might survive the imprisonment and be released. And the Lord, through the prayers of the Hieromartyr Michael, fulfilled his request: he lived to the end of his term and then served in the church for a long time.
The brother of the wife of Father Michael, the priest Paul Konyukhov, served after the death of his father, Archpriest Vasily, in the Trinity Church. At the temple, he organized a school for children from poor families who could not send their children to school. Apart from other teachers, there was Father Paul and his wife Elizabeth, who taught children needlework and church singing. Education in it was given so that graduates could work as teachers. After the revolution, the school was closed, but the temple continued to serve.
Father Paul was arrested in 1935. The formal reason for the arrest was that the priest commemorated the murdered Tsar Nicholas II and his wife during the liturgy. Together with Father Paul were arrested the priests Aleksey Drozdov, Pyotr Kozelsky, Theodor Dolgikh and the lay people Pankratov and Laptev. They all died in custody. One of the sisters of Father Paul was married to the priest Sergiy Bazhenov, who served near Yekaterinburg and was tortured by the Bolsheviks there.
For general Church veneration, Father Michael Nakaryakov was numbered among the holy new martyrs and confessors of Russia at the Jubilee Bishops' Council of the Russian Orthodox Church in August 2000.
Father Michael Nakaryakov is the heavenly patron of the Transfiguration Convent in the city of Usolye, of the Perm diocese.