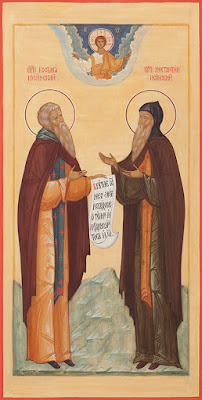 Our Venerable Fathers Constantine and Cosmas were monastic followers of Saint Barlaam of Khutyn (Nov. 6) and his successor, Saint Anthony of Dymsk (Jan. 17). About the year 1220, they left the Khutyn Monastery and settled on a wilderness peninsula, situated 3 versts from the city of Staraya Rus, between the Rivers Polista and Smezhnya. In time they founded a monastery there in the name of Saint Nicholas, headed by Saint Constantine until his death (ca. 1240). Saint Cosmas continued with the exploits of his mentor. He was buried in the same grave with Saint Constantine. Their bodies rest in the Nikolo-Kosinsky Monastery beneath the vestibule of the Nikolaev Church, built in 1820 over the tomb of the Saints.
John at 10:51:00 AM
Share
‹
›
Home
View web version