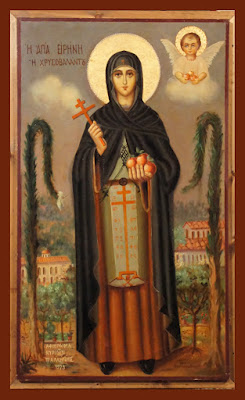 In he year 1944, Nicholas Mavromatakis was a resident in Kifisia of Athens. He was a pious Orthodox Christian who was married and had seven children. His wife was expecting their eighth child. Nicholas and a friend took a position at Ntaou Penteli in Attica, hauling wood and wood charcoal. It was during this time that a member of the Greek Resistance had killed a German garrison commander in Rafina of Attica as well as his driver while in an automobile.
On July 14th the German high command ordered the arrest of all those found in the vicinity of Ntaou Penteli. Approximately forty men were rounded up, including Nicholas Mavromatakis. None of the forty had any connection with the killing of the two Germans. The forty were taken as prisoners and transported to the village of Harvati near the large property of Levides. The men were ordered to strip naked and fall prone to the uneven ground. They were ordered to drag themselves, on their bellies like snakes, across uneven terrain. After the passage of a considerable amount of time, they were all exhausted and bruised. Then they were directed to stand on their feet in rows of three. The German soldiers then began shooting them in their backs with automatic weapons.
As the Nazis were mowing down the men, row after row, Nicholas knew his turn was coming to join the other corpses. He made the sign of the Cross and prayed to Saint Irene Chrysovalantou, saying: "O my Saint Irene Chrysovalantou, as many times as I could, I worked at your monastery and helped with its needs in order to win your favor. So now I beg you to not forsake me. But remember my past toils at this critical moment, lest the Germans should murder me unjustly and leave my children unprotected and orphaned of their father."
Having uttered this prayer, Nicholas suddenly collapsed on the ground as one dead. Mentally, however, he kept calling upon the name of Saint Irene. Nicholas then noticed that even though men all around him were being shot and falling dead all around him, he had himself not been injured in any way. A spiritual calm and courage came over him despite the carnage that was surrounding him.
Suddenly, Nicholas beheld before his eyes a lovely and tall nun, with a gladsome countenance. He immediately knew it was Saint Irene, who came as an answer to his prayers to rescue him, and he was filled with great joy. Nicholas then addressed her from his soul, saying: "My Saint Irene Chrysovalantou, if my child that is about to be born is a girl, I shall dedicate her to your convent." He prayed like this for about an hour without moving, not wanting the Nazis to know that he was still alive. Meanwhile, he could hear the woeful cries of the wounded.
As the cries died down and the silence of death set in, the Nazis noticed that Nicholas was still alive, and wondered how he survived the spray of bullets from their machine guns. The soldiers took him and brought him to the Levides property, where they had a tent. There he was kept under guard, lest he escape. That night, Nicholas kept vigil in prayer to Saint Irene that she would work her miracle and deliver him again from certain death.
At dawn, the soldiers took Nicholas outside of the tent and had him stand under the hot summer sun from five in the morning until noon. After this, they escorted him to the office where many German officers were ready to examine him. One of them, who acted as a translator, questioned him with a very rough accent. He declared: "We have heard that you are a big communist!" Nicholas immediately replied: "You are ill-informed in this. I am an unworthy servant of God, and I have been proclaiming His gospel for many years." The Nazi asked: "Do you know what Christ was teaching?" Nicholas answered: "Indeed, 'peace be unto you' and 'love for one another'." The translator then asked: "Are you married?" Nicholas responded: "Yes, I am married with seven children, and an eighth is soon expected." This answer astonished the Germans. The translator then told him: "It appears that you are a good Christian. Take your identification papers and your things, and return to your house."
Though Nicholas knew it was by a miracle of Saint Irene that he survived this ordeal, he nonetheless thanked the Germans for granting him his life. As soon as he was out of their sight, he ran as fast as he could from the Nazi encampment, giving glory and thanks to God, as well His handmaid Saint Irene Chrysovalantou. When Nicholas returned home, he did not forget his promise to Saint Irene. Though his wife was not keen on dedicating their newborn girl to a convent, Nicholas persuaded her that it was the right and proper thing to do to pay back his vow. Therefore, when the girl came of age, her parents presented her to the Monastery of Saint Irene Chrysovalantou in Lykovrisi, where Nicholas also committed to volunteer his services in performing manual work for the sisterhood.