Venerable Paul of Xeropotamou, who built two Monasteries, that of Xeropotamou and Saint Paul, namely Saint George, who lived in the year 820, met his end in peace.*
Verses
Paul founded two Monasteries below,
He dwells in a Monastery with Angels above.
Saint Paul of Xeropotamou, in the world Prokopios, was allegedly the son of the Roman Emperor Michael I Rangabe (811-813), who later resigned the imperial office and became a monk in a monastery he built. Having received the finest education, Procopius became one of the most learned men of his time. His “Discourse on the Entrance of the Most Holy Theotokos into the Temple,” the “Canon to the Forty Martyrs”, the “Canon to the Venerable Cross” and other works gained him great renown. But worldly knowledge and honors did not interest him. He exchanged his fine garb for beggar’s rags, and he went to the Holy Mountain to a place called Xeropotamou. He built a cell there at the ruins of an old monastery founded by the empress Pulcheria in honor of the Forty Martyrs. From Kosmas, a hermit, he received monastic tonsure with the name Paul.
Saint Paul is desscribed by some as being a eunuch, which is why he is depicted in iconography as being beardless. This is supported by the historical account that described how Michael I and his family were allowed to live in monasteries after his sons were castrated once he abdicated in favor of Leo V the Armenian. Out of humility the Saint did not reveal his erudition to anyone. The fame of Paul’s strict life quickly spread throughout the Holy Mountain. He became called Paul of Xeropotamou, and the monastery where he pursued monasticism, to the present day bears the name Xeropotamou (“dry river”). 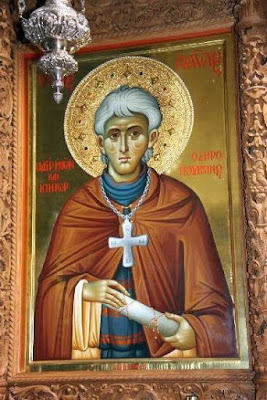 At that time the emperor Romanos, a relative of Paul, ascended the throne.* Through the Protos of the Holy Mountain he requested the Saint to come to Constantinople and planned a splendid reception for him. The humble Paul, not betraying his monastic duty, appeared with a cross and in torn robes amid the courtly splendor and magnificence. Saint Paul confirmed his fame as a chosen one of God, miraculously healing the grievously ill Romanos by placing his hand on him. But the vanity of courtly life, promised by the gratitude of the emperor, did not interest the Saint; he returned to the Holy Mountain, having asked one favor of the emperor: to restore the Xeropotamou Monastery.
In the holy altar in the consecrated katholikon of the restored monastery, was put a piece of the Honorable Wood of the Life-Creating Cross of the Lord, given to Saint Paul by the emperor Romanos.
Soon the Xeropotamou Monastery was filled by a throng of monks, wanting to put themselves under the guidance of the holy ascetic, but Saint Paul, having entrusted the rule of the monastery to one of the brothers, withdrew to the remote wilderness. His quiet was again disturbed by disciples, not wanting to leave their Elder. Then the monk requested of the emperor the means for the building of a new monastery. Thus the Saint founded a monastery in the name of the Holy Great Martyr and Trophy-Bearer Saint George. The first head of the new monastery was Saint Paul himself, who also brought a piece of the Honorable Wood of the Cross of the Lord there. 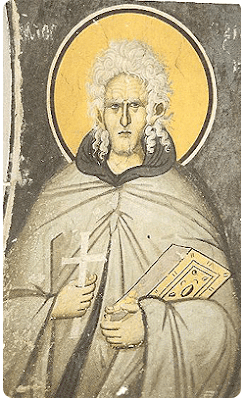 Having been informed in advance by the Lord of his impending end, the Saint summoned the brethren of the Xeropotamou and the new Georgikos Monasteries and gave them his final instructions. On the day of his death, Saint Paul donned the mantle, and read the Prayer of Saint Ioannikios, which he said continually: “My hope is the Father, my refuge is the Son, my protection is the Holy Spirit, O Holy Trinity, glory to Thee,” and he received the Divine Mysteries of Christ.
Saint Paul had instructed in his will to bury his body on the peninsula of Pongosa (opposite the Holy Mountain). But by the will of God the ship was driven to the shores of Constantinople, where the Emperor and Patriarch with the pious took the body of the Saint and solemnly placed it in the Great Church (Hagia Sophia). After the sacking of Constantinople by the Crusaders, the relics of Saint Paul were transferred to Venice. 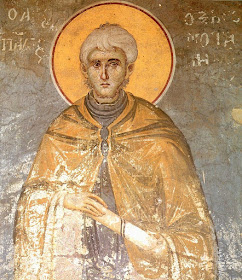 Notes:
* This summary and the iambic verses are taken from the Synaxarion of Constantinople.
** It should be noted that scholars believe the history of the two monasteries allegedly founded by Saint Paul of Xeropotamou is a lot more complicated. One theory. which is most likely, is that the traditional life of Saint Paul fuses the lives of two Saint Paul's who each founded one monastery.
Apolytikion in the Fourth Tone
The angel incarnate and the ascetics' pedestal, the first to build the monastery on the torrent, Paul the glorious above together summons the array of the angels, below he brings together the throng of his disciples to celebrate in song his holy memory.