Help Me Solve a Mystery About Hagia Sophia 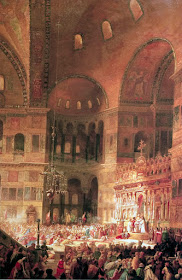 The painting above has been circulating the internet for over a decade now, and no one as far as I know has been able to trace its origins. The common explanation is that this painting dates back to the 12th century and is an accurate depiction of what Hagia Sophia looked like at that time. It supposedly depicts King Richard the Lionheart being received by the Emperor in Hagia Sophia during a ceremony. Others say it depicts Prince Bohemond I of Antioch being received by the Emperor. It is said to be the only painting of the interior of Hagia Sophia as a church, painted before it became a mosque, as all other paintings usually depict the interior as a mosque.

The problem with the explanation above is that this painting is clearly not a 12th century painting, but more like a 19th century painting that reimagines what Hagia Sophia may have looked as a Christian church. There seems to be no other explanation online other than the theory that it is a 12th century painting by an anonymous painter. Because most of my books are in boxes, I can't look to see if this painting appears anywhere. Therefore I am putting this out to the public so we can finally figure out the origins of this painting. If anyone has any good and reliable information, message me at mystagogy@aol.com. You will get the credit if this mystery is solved.

Update: The mystery has been solved! Will post result tomorrow.