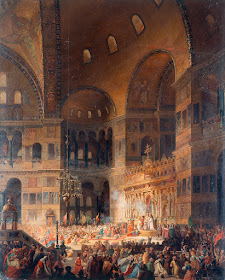 Yesterday I posted about a mysterious painting of Hagia Sophia that has been circulating the internet for many years with a false origin story, and I requested of my readers to help me solve the mystery. It appears the mystery has been solved, thanks to the help of Fr. Andrew Stephen Damick and the Society for Orthodox Christian History in the Americas. They provided evidence that the painting is of Richard the Lionheart receiving the Lord's Supper in Hagia Sophia, it was painted by Gaspare Fossati in 1849, and it is currently held in the Swiss National Museum.

When I first set out to find the true origins of this painting, my first thought was that it was a Fossati lithograph, but after looking into it I noticed many differences between this and his other work, and there were no sources to connect this image with him, so I dismissed the idea. It seems therefore that my first impression was correct. The only online link that confirms this is from the blog of the Swiss National Museum (here), which I find to be unfortunate, as the truth opens up other questions that I would like answered. For example, why did Fossati paint this image in particular? Not only did Richard the Lionheart never go to Constantinople, but he never entered Hagia Sophia let alone receive Holy Communion there. What, therefore, is the point of this image? If someone has an answer, please get in touch with me. I also want to know why this painting is in the Swiss National Museum apart from his other lithographs of Hagia Sophia which I believe are located in Greece.
Below are a few words about the Fossati brothers:
Brothers Gaspare (1809-1883) and Guiseppe (1822-1891) Fossati, were born in Switzerland and trained as architects in Italy. In 1833 Gaspare moved to St. Petersburg, and in 1836 he became the official court architect. In 1837 he moved to Istanbul to plan the new Russian embassy; he stayed to work on other projects including restoration work and original architecture, often collaborating with Giuseppe.
In 1847 Sultan Abdülmecid (1823-1861) commissioned the Fossati brothers to restore Hagia Sophia, a project which included removing the plaster covering the Byzantine mosaics. Approximately 800 workers were employed for about 2 years; they repaired cracks, strengthened foundations, renovated mosaics, and renovated the mihrab and the minbar.
In 1849 the restored building was revealed. 22 lithographs of Hagia Sophia were made. After the restoration, the mosaics were covered up again with plaster. The brothers continued their career as architects in Istanbul, finally returning to Switzerland in 1858.
To the credit of the Fossati brothers, if not for their restoration work, Hagia Sophia would not have survived as it has today.