The Theotokos as the Mystical Tongs 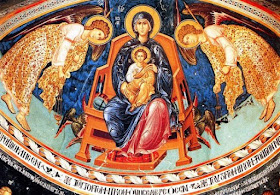 By John Sanidopoulos
A common issue in time of epidemics is whether or not to change the way Orthodox Christians receive Holy Communion, which is done with a common spoon. This spoon, however, is not called a spoon by Orthodox Christians, but it is referred to as Holy Tongs, because it holds Christ the burning coal, who is consumed as a burning fire. This is based on the vision of the Prophet Isaiah (6:6-7):

Then one of the seraphim flew to me with a live coal in his hand, which he had taken with tongs from the altar. With it he touched my mouth and said, “Behold, this has touched your lips; your iniquities are taken away and your sins have been purified.”

In the liturgical texts of the Orthodox Church, based on the writings of Saint Ephraim the Syrian, Saint Romanos the Melodist, and Saint Methodios of Olympus, the vision of the Prophet Isaiah was interpreted as a prefiguration of the Reception of Christ in the Temple. The burning coal which cleansed the prophet of his sins was Christ, "who takes away the sins of the world" (Jn. 1:29), while the tongs which held the coal represented Mary the Mother of God.
In the Small Vespers service for the Feast of the Reception, we chant:

"Christ the coal of fire, whom holy Isaiah foresaw, now rests in the arms of the Theotokos as in a pair of tongs, and he is given to the Elder. With fear and joy Symeon held the Master in his arms, and asked for his release from life, singing the praises of the Mother of God."

In Canticle 9 of Matins the hymnographer has Symeon exclaim:

"Mary, you are the mystical Tongs, who has conceived in your womb Christ, the live Coal."

We also see a reference to this at other times in the liturgical year, such as on the Sunday Before Christmas (Great Vespers, Ode 7, 3rd Sticheron):

"The tong, which the Prophet Isaiah saw of old, has come carrying in her womb the divine coal, Christ, who burns up all the material of sin and guides the souls of the faithful to the light."

Such imagery is repeated by Germanos I of Constantinople, Sophronios of Jerusalem, John of Damascus, Andrew of Crete, George of Nicomedia, Emperor Leo VI the Wise, Iakovos the Monk, Neophytos the Recluse, Germanos II of Constantinople, Gregory Palamas and many others.
It is clear that the purifying coal in Isaiah's vision is interpreted as a foreshadowing of "the God who comes to Symeon." The reason why the burning coal was purifying instead of consuming for the Righteous Symeon, was because he had the grace of the Holy Spirit.
The vision of Isaiah is fully enacted during the Divine Liturgy as well. This is why the priest quotes the words of the Prophet Isaiah immediately after receiving Holy Communion, saying: "Behold, this has touched your lips; your iniquities are taken away and your sins have been purified." Holy Communion, which is the Body and Blood of Christ, has the grace to either consume the recipient or to purify them, because it is Christ, who is a live coal. We also see this vision of Isaiah materially fulfilled every time we enter the nave of an Orthodox Church, and see over the holy altar in the apse an image of the Theotokos holding Christ in her arms like a pair of tongs holding burning coal.
So it is not only the Body and Blood of Christ that hearkens us back to the vision of Isaiah. The tongs also play a significant role. The tongs are not just a simple spoon or instrument or utensil that conveys to us the burning coal of the Holy Eucharist, but it represents the Theotokos herself, who first contained the burning coal in her womb, and then carried it in her arms to the Elder Symeon. The tongs therefore are also an instrument of grace, they are the bridge connecting heaven and earth, the ladder by which we enter Paradise.
In the early centuries of the Church, the holy tongs were represented by the hand of the priest, but later on, more than a thousand years ago, the priest took on the image of the seraphim, and for pastoral and practical reasons, not for fear of disease, this method of receiving Holy Communion was changed and a spoon became the holy tongs. And herein lies the significance of the holy tongs: If it was not for the Mother of God, the Son of God would have come to earth as a burning fire that instead of bringing salvation, would have consumed the human race and all of creation, but because He became a man through the Mother of God, she became the mystical instrument by which we are able to see and handle this consuming fire and place it on our lips and digest it in our bodies, bringing us life and light and grace and purification and communion with God.