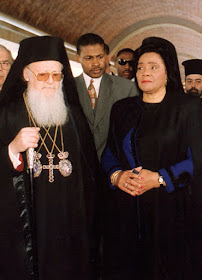 On October 31, 1997 Ecumenical Patriarch Bartholomew was the first religious leader to visit the tomb of Civil Rights Leader Dr. Martin Luther King, Jr. in Atlanta, Georgia for a Wreath-Laying Ceremony in his honor at the Martin Luther King Center for Social Change. Present and introducing him was Coretta Scott King.
There he spoke the following words:
Beloved and dear Mrs. King,
Your Eminence, Archbishop Spyridon of America,
Your Grace Bishop Alexios,
Dear Friends,
We have come to this shrine of memory today, as a humble apostle of peace, to pay tribute to another apostle of peace. As a token of our love and our gratitude, we offer this wreath as a sign of the wealth of God's creation. In doing so, we remember another sign of reconciliation, the twig of the olive tree in the beak of the dove, which signaled the end of the flood. Although our peace is not yet complete, and the dream of Dr. King is not yet fully realized, we pray that this humble offering from our heart to yours, may be another sign that the flood of tears might one day cease.
Mrs. King, on behalf of the Ecumenical Patriarchate of Constantinople, we pray that the work of your noble husband will continue through this Center. We pray for you and your family, that the significance of his martyrdom for the American people and the people of the world, will ease the burden of your sacrifice of love.
Finally, we pray that his soul might abide at rest, in blessed repose and the sure and certain hope of the resurrection, through the grace and love and mercy of God. May his memory be eternal.
On November 4, 2009 Ecumenical Patriarch Bartholomew addressed the audience of Georgia University with the following words from his lecture A Changeless Faith for a Changing World:
"True progress is a balance between preserving the essence of a certain way of life and changing things that are not essential. Christianity was born a revolutionary faith—and we have preserved that. In other words, paradoxically, we have succeeded in not changing a faith that is itself dedicated to change.
Let us, as the lawyers would say, make a disclaimer: By calling Christianity revolutionary, and saying it is dedicated to change, we are not siding with Progressives—just as, by conserving it, we are not siding with Conservatives. All political factions believe God is on their side—as Abraham Lincoln said of the Union and Confederacy, 'Both read the same Bible, and pray to the same God; and each invokes His aid against the other.'
The only side we take is that of our faith—which today may seem to land us in one political camp, tomorrow another—but in truth we are always and only in one camp, that of our Lord and Savior Jesus Christ....
Let us begin with a Christian concept that has led to some of the most significant changes of the last century that were not delivered at the barrel of a gun—quite the opposite. It is the Christian concept of nonviolence, even and especially in the face of evil....
We Orthodox Christians will forever hold in our hearts the late Archbishop of America Iakovos of blessed memory, who shared the faith, courage, and humility of those early Christian martyrs and joined hands with Dr. King in Selma, Alabama, in March of 1965. But there is another Orthodox link in this chain…
Dr. King was extremely conversant with Christian theology, and yet at a critical juncture early in the civil rights movement, he began to doubt the power of love to resolve social problems. A chance conversation about Gandhi led King to study the Mahatma’s successful use of nonviolence to gain freedom for India—and that restored Dr. King’s belief that love was powerful enough to gain civil rights for African-Americans.
That story is well-known—what you may not know is that Gandhi’s inspiration was an Orthodox Christian whose name will be familiar to you—Leo Tolstoy—who in 1893 wrote a seminal book not about Christian ideas, but rather how to put those ideas into practice, especially the ideas expressed in Matthew 5. The Kingdom of God Is within You was translated into English in 1894 and the same year a copy came into the possession of a young Hindu lawyer in South Africa. Gandhi found the book 'overwhelming' and after launching his campaign of nonviolent civil disobedience in India in 1906, could often be seen carrying Tolstoy’s writings with him into jail. The two men corresponded until Tolstoy’s death in 1910, and in fact the last long letter Tolstoy wrote was to Gandhi.
Tolstoy had his own inspiration not only in the New Testament but also in the works of others who took seriously the injunction of Jesus to 'resist not evil,' including the American abolitionist William Lloyd Garrison and the pacifist Adin Ballou. But it is safe to say that, in the hands of Orthodox Christians such as Tolstoy and Iakovos, the doctrine of nonviolence helped lead to some remarkably progressive achievements."