Saint Nicetas was born around 335 in the Roman province of Dacia. He was probably either a Goth or a Thracian. Around the year 370 he was made the Bishop of Remesiana (present-day Bela Palanka, Serbia). In 398, Nicetas made a pilgrimage to Nola to visit the grave of Felix of Nola and he had gained the friendship of Paulinus of Nola.
He was engaged in active missionary work among the peoples to the northeast, not yet enlightened by the light of Christ. The lands and peoples covered by his apostolic preaching lay on both sides of the Danube. This points to the land and population of Dacia Trajan, Thrace, Mysia and Lesser Scythia - the territory now divided between Serbia, Bulgaria, Romania, Moldova and Ukraine. Saint Nicetas became the founder of not only new communities and temples, but also new dioceses, or diocesan centers. Because of his missionary activity, his contemporary and friend, Paulinus of Nola, lauded him poetically for instructing in the gospel those barbarians changed by him from wolves to sheep and brought into the fold of peace, and for teaching bandits to sing of Christ with a Roman heart, who previously had no such ability. Paulinus glorified Nicetas as the “father of the whole north” and the “good servant of Christ”. He also came to be known as the Apostle to the Danube.
Lengthy excerpts survive of his principal doctrinal work, Instructions for Candidates for Baptism, in six books. They show that he stressed the orthodox position in trinitarian doctrine. They contain the expression "communion of saints" about the belief in a mystical bond uniting both the living and the dead in a certain hope and love. No evidence survives of previous use of this expression. He also wrote On the Various Names of Christ, The Vigils of the Servants of God, On the Benefits of Psalmody, The Power of the Holy Spirit, An Explanation of the Creed, and possibly authored the magnificent hymn Te Deum.
He reposed some time between 414 and 420. 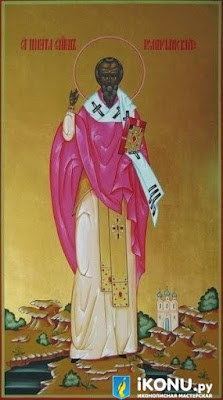 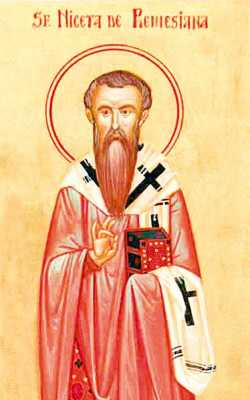 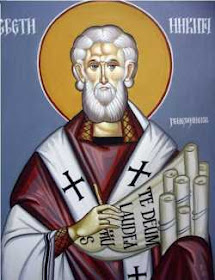 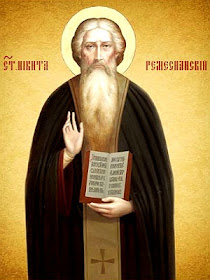