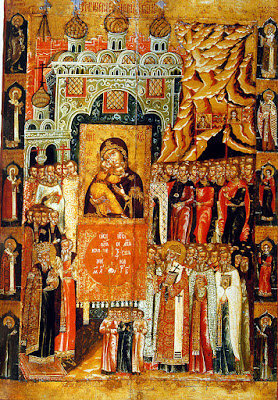 On June 23rd the Russian Church celebrates the miracle of the Vladimir Icon of the Mother of God, which led to the saving of Moscow from the invasion of Khan Achmed in 1480.
Khan Achmed bin Küchük, Khan of the Great Horde between 1465 and 1481, invaded the Russian lands and headed for Moscow in the year 1480. Grand Duke Ivan III Vasilievich of Moscow and All Rus went out to meet him with the army. The troops met on the Ugra River (Kaluga Region), 150 miles from Moscow. They stood off shouting at one another on opposite banks for four days before a conflict became inevitable. In the Russian camp was the Vladimir Icon of the Mother of God, in front of which prayers were constantly offered. All of Moscow prayed to the Mother of God for the protection of their capital. The Metropolitan wrote to the Prince a message in which he urged him to bravely stand against the enemy, hoping for the help of the Mother of God. The Prince ordered his troops to retreat from Ugra, wanting to wait for the Tatars to cross. The Khan decided that the Russians were ambushing them, so he also began to retreat, at first slowly, and at night they ran, driven by fear. In gratitude for the liberation of Russia from the Tatars, a feast was established in honor of the Mother of God, by whose intercession it is believed drove the Khan's army away. After this miracle, the Ugra River became known as the "Belt of the Mother of God." 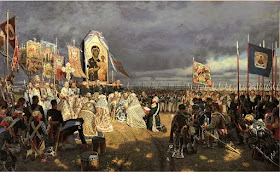 Apolytikion in the Fourth Tone
O Mistress, Empress and Lady, defend all who are in danger and misfortune, or weak from many sins, and who stand before your holy Icon, praying with tears, humility, repentance, and invincible hope, free them from all evil, give them the grace they need. And save us all, O Virgin Mother of God, for You are the divine refuge of those who follow you.
Kontakion in the Eighth Tone
O victorious Leader of triumphant hosts, you have delivered us from evils by the coming of your honorable Icon, O Lady Theotokos, radiantly we celebrate the festival of your synaxis, and as usual we cry to you: Rejoice, Bride unwedded.