The Holy New Hieromartyr Basil Kalapalikes was born in 1858. He was a married priest with three children, two sons and one daughter, and was the parish priest of the Church of Saint Demetrios in Chiliodendrou of Kastoria.
On the evening of 21 June 1902, certain Turks burst into his parish church while he was serving Vespers, and they shot him with their firearms as he stood before the Holy Altar. Seriously wounded, Basil came out of the church to investigate the cause of his injury, and he was stabbed by the unbelievers, mercilessly beaten with rods and axes, his head was broken, his jaw was twisted and his body was thoroughly injured to death. His blood-stained body, with difficulty, was later recognized by his beard and sacred robes and was buried behind the Holy Sanctuary.
After continuous appearances by the Hieromartyr, the sacred relics were uncovered on 2 May 1987, and his robe, skull with skin and beard, and the right hand with fingers in the form of giving a blessing were found. After this, unfortunately, the bones were cleaned of the remaining skin out of ignorance, and they were placed in a box and buried where they were found.
On 28 November 2014, a second translation of the relics took place, which was accompanied by a beautiful fragrance emerging from the relics, as witnessed by all the faithful and clergy in attendance. Till this day the relics remain fragrant.
On Friday 14 February 2020 the Ecumenical Patriarchate, by recommendation of Metropolitan Seraphim of Kastoria, numbered Saint Basil with six other New Martyrs from Kastoria among the Saints of the Church. 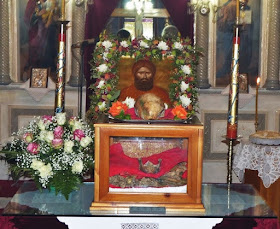 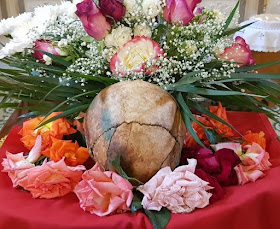 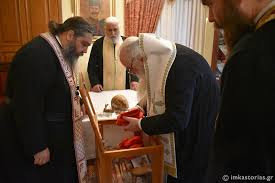 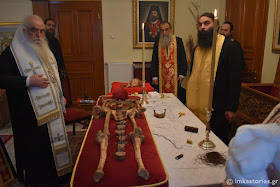 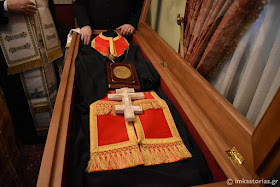 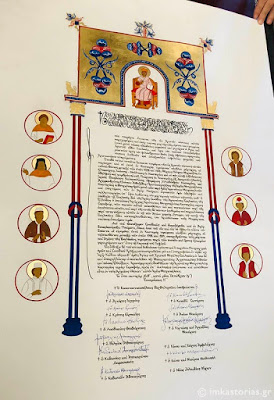