Treatise on the Art of Letter Writing (St. Gregory the Theologian) 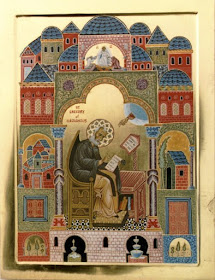 Letter 51 of St. Gregory the Theologian is addressed to Nicobulus the Younger, his great-nephew. Gregory considered Nicobulus "the most important of the relatives I care about." He had studied under Gregory in Cappadocia and then hoped to study overseas, desiring "excellence in speaking" through "the fiery force of rhetoric" as his greatest ambition, to make a name for himself "both in assemblies and in court." His model in this of course was his great-uncle himself. In this letter, Nicobulus the Younger, having requested of his great-uncle a treatise on letter writing, Gregory responds with a short letter about the art of writing a letter.
Of those who write letters, since this is what you ask, some write at too great a length, and others err on the side of deficiency; and both miss the mean, like archers shooting at a mark and sending some shafts short of it and others beyond it; for the missing is the same though on opposite sides. Now the measure of letters is their usefulness: and we must neither write at very great length when there is little to say, nor very briefly when there is a great deal. What? Are we to measure our wisdom by the Persian Schene,* or by the cubits of a child,** and to write so imperfectly as not to write at all but to copy the midday shadows, or lines which meet right in front of you, whose lengths are foreshortened and which show themselves in glimpses rather than plainly, being recognized only by certain of their extremities? We must in both respects avoid the want of moderation and hit off the moderate. This is my opinion as to brevity; as to perspicuity it is clear that one should avoid the oratorical form as much as possible and lean rather to the chatty, and, to speak concisely, that is the best and most beautiful letter which can convince either an unlearned or an educated reader; the one, as being within the reach of the many; the other, as above the many; and it should be intelligible in itself. It is equally disagreeable to think out a riddle and to have to interpret a letter.

The third point about a letter is grace. This we shall safeguard if we do not write in any way that is dry and unpleasing or unadorned and badly arranged and untrimmed, as they call it; as for instance a style destitute of maxims and proverbs and pithy sayings, or even jokes and enigmas, by which language is sweetened. Yet we must not seem to abuse these things by an excessive employment of them. Their entire omission shews rusticity, but the abuse of them shews insatiability. We may use them about as much as purple is used in woven stuffs.

Figures of speech we shall admit, but few and modest.

Antitheses and balanced clauses and nicely divided sentences, we shall leave to the sophists, or if we do sometimes admit them, we shall do so rather in play than in earnest.

My final remark shall be one which I heard a clever man make about the eagle, that when the birds were electing a king, and came with various adornment, the most beautiful point about him was that he did not think himself beautiful. This point is to be especially attended to in letter-writing, to be without adventitious ornament and as natural as possible.

So much about letters I send you by a letter; but perhaps you had better not apply it to myself, who am busied about more important matters. The rest you will work out for yourself, as you are quick at learning, and those who are clever in these matters will teach you.
Notes:
* Each schene, comprising 60 stades, is equal to 19,636 English feet.
** Each cubit, approximately equal to the length of a forearm, was typically about 18 inches or 44 cm.