An Alleged Portrait of St. Xenia of Petersburg Painted During Her Lifetime 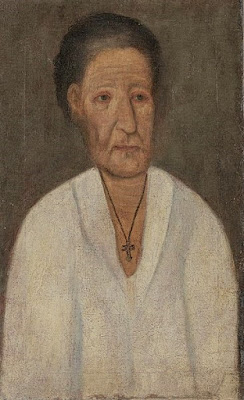 St. Xenia of Petersburg is said to have reposed around 1802. There is no documentary information about her life, and the first publications of folk legends about her date back to the 1840s. Yet in February of 2017 the State Hermitage Museum presented the alleged portrait of Xenia of Petersburg that may have been painted in her lifetime.
What we know of this portrait is that it was brought from Smolensk Cemetery, where St. Xenia is buried, by collector Fedor Morozov to the Russian Museum in 1930. Then he worked in the Russian Museum and his duties included the study of cemeteries in order to identify works of art. Morozov documented the painting as a portrait of Xenia the Blessed. 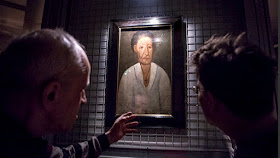 The Russian Museum was closed before World War 2 and the portrait was brought to the State Hermitage Museum. According to Dmitry Gusev, curator of the Department of the History of Russian Culture, “When the museum has such a colossal collection, it is natural that some objects do not immediately enter the scientific circulation. In the process of systematizing the collection, we came upon a portrait that nobody had paid much attention to before.”
As a result of laboratory research - in particular, chemical analysis of the soil - the Hermitage found that the painting was painted at the end of the 18th or at the very beginning of the 19th century. This puts it right within the final years of St. Xenia's life. 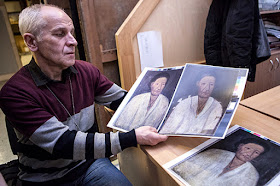 The work was restored and exhibited in the public area of ​​the Old Village Restoration and Storage Center of the Hermitage. According to the artist-restorer Nikolai Malinovsky, “it is clear that the portrait was revered, it was looked after. In the paint layer there was abundant soot and burns, that is, in front of the painting was a candle or an oil lamp. Before the canvas got into the museum, it was repeatedly cleaned of accumulated dirt, refreshed with new colors and even made some changes.”
He added that the portrait was painted "somehow spontaneously - quickly and confidently, in one go." "Probably the artist sketched the features of Xenia while she was sitting. In any case, the portrait is extremely individual, it is not a fantasy or a generalization. The artist’s eyes clearly saw the one whom he depicted,” Malinovsky believes.