Did Gregory the Theologian Refer to the Writings of Dionysius the Areopagite? 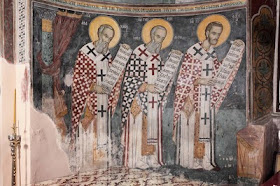 In his Oration on the Theophany of Christ, Gregory the Theologian writes in section 6:
"But when I say God, I mean Father, Son, and Holy Spirit... This then is the Holy of Holies, which is hidden even from the Seraphim, and is glorified with the thrice-repeated Holy, meeting in one ascription of the title Lord and God, as one of our predecessors has most beautifully and loftily pointed out."
The question is: Who is the "predecessor" Gregory is referring to? Some believe Gregory is referring to Athanasius the Great, while others believe he is referring to Dionysius the Areopagite.
Here is the problem: Gregory reposed in 390 and Athanasius reposed in 373, which fits well, but modern scholars believe the writings of Dionysius were not written by the first century Athenian, but were written by an anonymous writer who used the name "Dionysius the Areopagite" as a pseudonym 100 to 150 years after the repose of Gregory. If this true, then the only possible choice of the two is Athanasius. Perhaps, however, this may prove the writings of Dionysius can be dated earlier.
But let us trace the sources. Here is what Athanasius says (On Luke 10:22 and Matthew 11:27, sect. 6):
"What's nearer to God than the Cherubim or the Seraphim? Yet even they don't see God or stand on their feet; they don't dare offer their praises with bare faces, but veil them, while with untiring lips they glorify the divine and indescribable nature with the 'Holy, holy, holy...' The fact that these venerable living creatures offer their praises three times - 'Holy, holy, holy' - proves that the three persons are perfect, just as in saying 'Lord' they declare the Essence is one."
There is nothing that comes so close in the writings of Dionysius. Some refer to chapter 7 in the Celestial Hierarchy, but a close reading of that chapter has nothing as close as to what Gregory was referring to. If a case can be made for the authenticity of the writings of Dionysius the Areopagite, this reference doesn't seem to be part of it.
It should be concluded therefore that the "predecessor" Gregory the Theologian was referring to was in all likelihood Athanasius the Great.