Saint Abo was born of pure Arab stock in Baghdad, raised a Muslim and practicing the trade of perfumer. At that time, the latter half of the eighth century, Nerses prince of Georgia was imprisoned in Baghdad by Caliph Al Mansur (754-775) for three years. When Nerses was released and permitted to return to Georgia, Abo, by the inspiration of God, being seventeen or eighteen years old, entered into his service and, leaving all his family behind, went to Georgia with him. There he learned Georgian, read the Old and New Testaments, attended church services with interest and zeal, and began to fast and pray secretly, since Georgia was in the control of the Saracens and he could not become a Christian openly.
In 779, Duke Nerses fled from Saracen wrath to the north, taking refuge with the Khazars, and Abo accompanied him, and at last was able to receive holy Baptism, after which he devoted himself even more completely to fasting and prayer.
When Duke Nerses moved on to Abkhazia, then a Christian kingdom, Abo again accompanied him, and seeing the piety of the Christians there was inspired with even greater zeal. On the feast of Saint Anthony the Great, January 17, he set himself to imitate his great asceticism. Though living in the world, he practiced the life of a hermit, bridling his tongue completely and fasting from all food Monday through Friday. 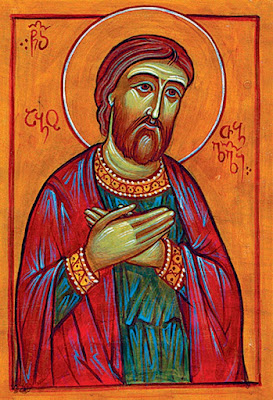 Upon receiving permission from the Caliph to return to Georgia, Duke Nerses set off with his retinue. Abo was warned by the Abkhaz king not to return to Georgia, because as a convert to Christianity his life would be in danger. Soon, however, Abo became restless and told the king, “Let me go, and I will freely declare my Christian faith to those who hate Christ!”
For three years Abo went about in Georgia as a known convert to Christianity without being arrested. Then his own former countrymen betrayed and captured him, but he was released soon after at the request of the duke Stepanoz.
A new emir was appointed to rule in Tbilisi, and when the Christians heard that he was plotting to capture Abo, they begged him to conceal his identity. But Abo simply rejoiced and told them, “I am prepared not only to be tortured for Christ, but to die for His sake as well.” As predicted, the emir’s servants captured Abo and brought him before a judge. The judge tried in vain to entice Abo to return to the faith of his ancestors. Then, in a rage, he ordered that Abo be cast into prison and that his hands and feet be fettered in chains. This took place on the feast of Saint Stephen, December 27, 785. But his suffering for Christ filled the blessed Abo with even greater love, and he asked his Christian brothers and sisters to sell his clothes and use the money earned to buy candles and incense for local churches.
Saint Abo spent nine days in prison fasting, praying, chanting psalms, and selling all that he had in order to give alms. On his last night in prison he stripped off his clothes to be sold, and with the money bought candles and incense to be burned in the churches for him, with prayer for his martyrdom. He spent the whole night standing in his prison cell holding up two great candles which burned down in his hands as he recited the Psalms. 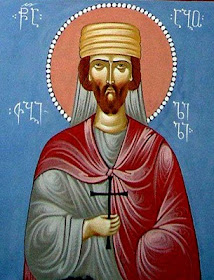 On the day of his execution Abo washed his face, anointed it with holy oil, partook of the Holy Gifts, and prepared for his death as though preparing for a feast. “Weep not, but rejoice, for I am going to my Lord. Pray for me, and may the peace of God protect you,” he cheerfully told the faithful Christians who surrounded him in his last hours.
His martyrdom took place, as the writer of his martyrdom says, “In the reign of our Lord Jesus Christ, in that year after His Passion and Resurrection when Constantine, son of Leo, [Constantine VI, son of Leo IV “the Khazar”], was reigning over the Christians in the great city of Constantinople, when Musa, son of Mahdi, Commander of the Faithful, was reigning among the Saracens [Musa, the fourth Abbasid Caliph, who reigned 785–86, was succeeded by his younger brother, Harun al-Rashid], in the pontificate of Samuel, Catholicos of Georgia, when Stephen, son of Gurgen, was Duke of Georgia, in the year 6424 from the creation [A.D. 786], on Friday, January 6th.”
Abo was brought out of prison on Friday, January 6th, and taken to the judge. After refuting the judge’s arguments, and answering his question what delight Christ granted him that he would want to die for Him, by bidding him be baptized and find out, he was led out into the courtyard of the Amir’s palace. There Saint Abo placed his arms on his breast in the form of a cross and joyously bowed his head beneath the sword. The executioners swung their swords three times in hopes of frightening Abo into denying Christ, but the blessed Abo stood unyielding until his last breath. Finally, convinced that all their efforts and cunning were in vain, the executioners were given a sign and they beheaded the holy Abo. Defeated and ashamed, Abo’s godless executioners tossed his body, his garments, and the earth that had been soaked with his blood into a sack, dragged it outside the city, and burned it near the Mtkvari [Kura] River. Then they wrapped his ashes in sheepskin and cast them into the river. 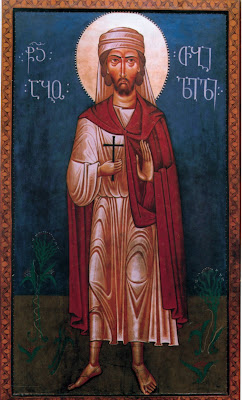 The Christian townsfolk flocked to where his body had been burned, bringing candles and incense and having no fear of the tyrants. Many who were afflicted were healed by earth taken from the spot.
At dusk of that day, a fiery star stood over the place where they had burnt his body and stood over it for a long time, flashing bright as lightning, visible by all. The following night a more marvelous light came out of the river at the place where his relics had been thrown in; it was not quenched by the waves, but shone brightly for a long time in the form of a pillar of light illuminating the river and the banks on both sides and the bridges from top to bottom. The Church of the Holy Forty Martyrs, in whose courtyard his body was burnt, was discovered in 1998. A chapel to Saint Abo is located there as well.
Ioane Sabanisdze, a Georgian religious writer and Saint Abo's contemporary, compiled the martyr's life in his hagiographic account The Martyrdom of Saint Abo.Saint Abo is considered the Patron Saint of Baghdad.
The name Abo probably reflects the Arabic Abu, a prefix meaning “Father of.” Under the assumption that sons will name their first son after their own father, they are often called “Father of [their own father’s name]” in anticipation, even before they marry and have children. 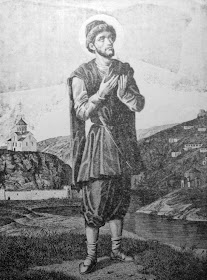