Saint Gregory the Recluse of the Kiev Caves

Venerable Gregory the Recluse lived in the fourteenth century in the Far Caves of the Kiev Caves Lavra. He is noted for living in seclusion as a recluse and his severe fasting practices, in which he is said to have only eaten uncooked grass and herbs all of his life. Those who were sick that came to him he would give some of this grass and herbs to eat, and they were healed. For this reason he became known as a Wonderworker. Scientific investigation of his sacred relic claims that Venerable Gregory died at an age between 40 and 50. He is not to be confused with the other Saint Gregory the Wonderworker of the Kiev Caves commemorated on January 8th, who lived in the eleventh century in the Near Caves. 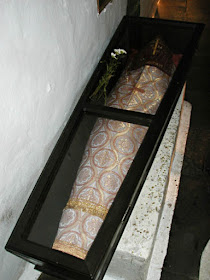