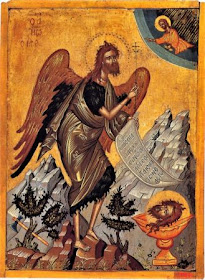 By Photios Kontoglou
He stands on a rock, like a wild bird, winged with thin legs, wearing camel's skin over his flesh shortly below his knees, and above that he is wrapped in an oily-green garment.
His head is disheveled like a wild evergreen oak, with a twisted curl at the top; the beard, sparse at the cheeks, thickening under the chin and spun into four or five spirals; the nose is thin and long towards the lower point; eyebrows compact; eyes very sad, fixed at a distance; the mouth melancholic, curved.
His expression is stern with charming strength. His hair of many strands falls to his shoulders. His face is very thin and dark-skinned from the heat of the desert. His hair and beard have hairs curled up due to laborious toil and the wind.
The eyes are rough and full of perseverance. The nose is turned. The cheeks project. Deep-cheeked, long-necked, bare-chested where the bones separate from his dark skin. With his right he makes the sign of a blessing and with his left he holds a pole with a cross and an open scroll (which either says "Behold the Lamb of God, who takes away the sins of the world" or if he's preaching in the desert "Repent, for the Kingdom of Heaven is near").
On a rock at the right hand corner of the icon is a container in which is found his cut off head. To the left is a wild tree, an oak, and among its branches is an axe wedged, which symbolizes the words of the Prophet: "The axe is already at the root of the trees, and every tree that does not produce good fruit will be cut down and thrown into the fire."
From his shoulders sprout the wild wings of an eagle in accordance with the prophetic saying: "Behold, I shall send forth my angel before your face, to prepare the way before you." The wings work together to make this sacred bird marvelous.
Source: Ἔκφρασις τῆς Ὀρθοδόξου Εἰκονογραφίας [The Expression of Orthodox Iconography], Αθήνα 1960, Α΄, σελ. 86-87. Translation by John Sanidopoulos.
John at 5:13:00 PM
Share
‹
›
Home
View web version