The Neutral Stance of Cyprus on the Ukrainian Issue 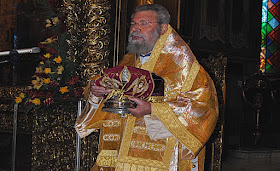 At the end of the Divine Liturgy on Sunday 3 November 2019, Archbishop Chrysostomos of Cyprus made the following remarks after the Church of Russia decided to cut off commemoration of the Church of Greece:
"I consider the stance of the Patriarch of Moscow unacceptable. We do not cut off commemoration of another Primate because we disagree with a position of theirs. Only if they become heretics do we cut off communion with them. And what I know is that neither the Ecumenical Patriarch nor the Archbishop of Athens are heretics. This, of course, does not mean I agree with them. Although we tried to mediate a meeting to find a solution, it did not find approval, so we did not persist. But neither the Ecumenical Patriarch wants to meet with Moscow, nor does Moscow want to meet with the Ecumenical Patriarch. This is why, as the Church of Cyprus, we also take a neutral stand because we do not agree with the stand of either of them and have not gone on to commemorate any new Primate."
Source: Translated by John Sanidopoulos.