Saint Mercurius the Faster of the Kiev Caves 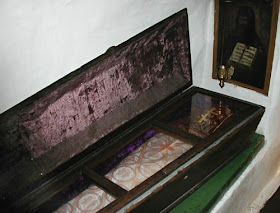 The November 24 commemoration of the Saint is made because of his namesake, the Holy Great Martyr Mercurius. He is also remembered on August 28, the Synaxis of the Saints of the Far Caves; and on the second Sunday of Great Lent, the Synaxis of all the monastic Fathers of the Kiev Caves. November 4 is is his principle feast day.