As the Rich Are Not Condemned for Their Wealth, So the Poor Are Not Saved for Their Poverty 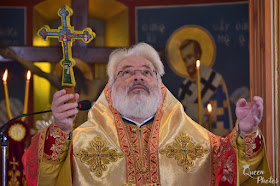 On the occasion of the Fifth Sunday of Luke, 3 November 2019, during which the Parable of the Rich Man and Lazarus is read in the churches, Metropolitan Damaskenos of Didymoteicho, Orestiada and Soufli made the following remarks in his sermon:
"It would be a mistake to say that the cause of the dramatic course of life for both was wealth for one of them and poverty for the other ... This is because the Word of God Himself gives us examples of rich people who were saved and poor people who were condemned. In other words, it is not these material goods per se that save or condemn man, but its mismanagement, which means that a rich man, in the sight of God, Who knows the depths of one's heart, can be unbound and independent from their wealth, and a poor man enslaved to and dependent on material goods ... The rich man was condemned to the suffering of hell not for his wealth, but for its mismanagement. He considered that tangible goods were solely his own property, whose sole purpose was his own good. Wealth became his god. He was blinded by greed, so he was indifferent to what was going on around him and to the needs of his fellow humans. Simply put, the reason for his condemnation was selfishness and indifference.
On the other hand, Lazarus was justified, not again because of his poverty, but for the patience he showed. A patience that led neither to disgust at God nor towards his wealthy fellow man. In this respect, the reason for his salvation and righteousness was to maintain his trust in God and his love for his fellow man. His perseverance to trust God and to believe. The belief that God is his exclusive helper. After all, this should not be irrelevant to the fact that the name Lazarus means exactly 'God is a helper'."
Source: Translated by John Sanidopoulos.