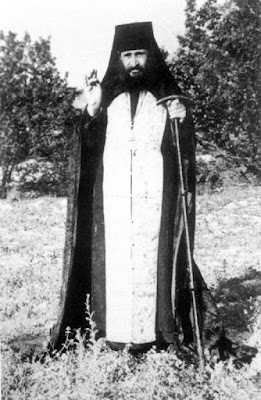 By Monk Moses the Athonite
In the village of Sipsa at that time there was someone who was seriously sick, who for eight months his soul would not depart from him. One day the Saint said:
"You have a sick person here and you never brought me to see him?"
Then they raised up the Saint [he was disabled at the time] to take him to the sick man's home.
After the Saint greeted everyone, he approached the sick man in particular and said:
"Why did you give a false promise and a false testimony?"
The sick man had lied about giving money to someone to buy an animal, which was free of charge from the state. The Saint ordered that they should go and bring back soil from the grave of the deceased, whom the sick man had deceived, and they placed it on him.
The Saint, after confirming that he confessed his sin, read the forgiveness prayer, and after ten days reposed peacefully in the Lord.
This was the first miracle, according to the villagers, that the Saint performed in Sipsa.
Source: Translated by John Sanidopoulos.