The Mysterious Fire of the Monastery of Mega Spelaion in 1934 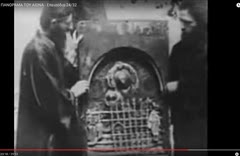 On the night of July 19, 1934 a devastating fire destroyed a section of the Monastery of Mega Spelaion in Kalavryta, Greece together with some of its unique treasures.
According to a 30-minute documentary that aired in 1983 called Panorama of the Century, which presents archival footage of the fire in a 40-second clip, a monk who was a refugee from Asia Minor twelve years earlier, managed to rescue the wonderworking icon of the Mother of God which was said to have been sculpted by the Apostle Luke, together with a cross, some liturgical fans (exapteriga), and the incorrupt hand of Saint Haralambos.
We are also informed that Metropolitan Theokletos of Kalavryta, who later became the Archbishop of Athens, made a rumor that the fire was a product of arson to destroy traces of mismanagement in the monastery.
Whether this rumor is true or not is hard to determine, and it remains a mystery till this day.
This was the fourth time the monastery had been destroyed by a fire. The others took place in 840, 1400 and 1640. Each time the wonderworking icon was saved. Emperor Andronikos rebuilt the monastery in 1285 after a fire.
After the fire of 1934, the monastery was rebuilt in 1937, under the auspices of King George II, who also founded a new wing.
In December 1943, Nazi troops looted the monastery and executed 16 people - visitors, novices and monks. Another nine monks were executed at the High Cross site. The remaining cells from the 1934 fire were set on fire. New buildings were erected after the war.
The first video below is the entire documentary, with the segment on the fire beginning at the 22:58 mark and ending at 23:36. The second video is just a clip of the fire segment: