Preface to the Commentary on the Prophet Joel (St. Cyril of Alexandria) 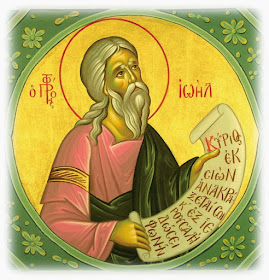 Commentary on the Prophet Joel
By St. Cyril of Alexandria
Preface
The divinely inspired Joel probably prophesied at the time when those placed before him—namely, Hosea and Amos—would also be thought to have done so. The Hebrews, in fact, decided that he should be ranked with them and not after Micah. His denunciation, at least in my opinion, is of the people of Israel, and he raises an extremely loud outcry against them for then reaching such a degree of insolence, stupidity, and insensitivity as not to be diverted from evil by anyone at all, and to succumb to calamities of such frequency, not to say successive occurrence, despite no interval occurring when some respite from trouble might be given, brief though it be. We shall find the blessed Prophet Isaiah also speaking in similar terms; he said, remember, "The anger of the Lord of hosts was enkindled against his people, and he stretched out his hand against them and struck them. The mountains quaked, and their corpses were like dung in the open street. For all this, his anger was not turned away; instead, his hand was still uplifted" [Is. 5:25].
You will understand how it was that they suffered one calamity after another, and how the hand of the striker remained uplifted as if still to inflict further blows on them. In other words, just as the worst illnesses sometimes require not a single incision but even more, so, too, the human mind, when it is a willing victim of insensitivity, requires very frequent striking if it is finally to recover the ability to learn how to operate to its advantage. The blessed prophet Joel therefore seems to have wisely applied chastisement to Israel as though it remained unmoved by the great number of previous punishments, and advised it at the same time to change from its involvement in turpitude to a choice for what pleased God. He added a promise of what was dearest to them if they decided to repent, and gave them confidence that they would find the Lord kind and mild.
While such is the thrust of his prophecy as a whole, we shall pursue the meanings of the text, and comment on each detail in succession.
From The Fathers of the Church, Commentary on the Twelve Prophets, Vol. 1.