The following excerpt comes from the travelogue of Henry Martyn Baird (1832-1906), an American historian and educator, who was a professor of Greek language and literature at New York University from 1859 until his death, and who lived in Greece for a year and recorded his travels and experiences. The travelogue is titled Modern Greece: A Narrative of a Residence and Travels in that Country with Observations of Its Antiques, Literature, Language, Politics, and Religion and it was published in 1856. The excerpt below records his experience at the Monastery of Mega Spelaion (Great Cave) in Kalavryta, Greece.
From Calavryta we had before us a two hours' ride to Megaspelion, along the pleasant banks of the small river Buraicus, winding through a narrow valley toward the Corinthian Gulf. The monastery is by far the greatest, richest, and most famous in Greece proper. Imagine a vast cavern upward of a hundred feet in height, and much wider, as the niche in which this curious establishment is situated, and this on the steep side of a mountain at a considerable distance above the ravine. The approach is along the hill-side by a path winding gradually toward it, and which might easily be defended against a host of invaders. The steep land-slopes are cultivated in front of it in a succession of terraces, each presenting the appearance of a garden. As we drew near the building, there could be nothing more singular than its appearance. A single wall, one hundred and eighty feet long, and seventy or eighty high, closes up the lower part of the cave's aperture. It is no less than twelve feet thick, and offers little hope to the assailant of his being able to force his way within. Above, it is pierced with windows, and surmounted by seven or eight wooden houses of curious and diverse aspect, built more or less lofty, according to the irregularities of the cave's mouth, and leaning against the almost perpendicular rock that towers three or four hundred feet aloft. The light materials of which they are constructed contrast singularly with the massive proportions of the wall that supports them, and from which they project considerably in different places with staircases and covered galleries sustained by props.
We rode around to the solitary portal situated at the southern end of the great wall; and here dismounting, we were welcomed by a number of monks, who were seated on a circular seat at the door, enjoying the shade and the evening breeze. Oriental custom required us to sit down and converse with them before entering the monastery, to which they welcomed us with much apparent cordiality. It devolved on me, as spokesman, to give the chief dignitaries some explanation of the nature of our tour, and to answer whatever interrogatories their curiosity might prompt them to make. As usual, these related principally to the affairs of the capital, but more especially to any new phase which the question of the possession of the Holy Sepulchre at Jerusalem had assumed since the last advices. As it was between two and three weeks since we had left Athens, we could give them little information that was new. H. had visited Megaspelion, when cruising in the Mediterranean in his own yacht, a couple of years since; but such is the number of strangers who from time to time come here to pass a night, that, naturally enough, the monks did not remember him. Profiting by a pause in the conversation, we excused ourselves on the ground of our day's travel, and betook ourselves to the room prepared for our reception, in one of those singular overhanging houses that crown the monastery wall. It seemed to be the best guest-chamber in the edifice. We were assured that we were but following in the footsteps of royalty, King Otho and Queen Amelia being uniformly entertained in this room whenever they come hither.

In the morning we were conducted through the building. The church, of course, was the part that the monks took most delight in exhibiting. Croziers and crosses, curiously carved, with other articles of solid silver, were proudly and admiringly displayed. But it was the holy "eikon," or picture of the Virgin, made, as we were informed, by the hands of St. Luke himself, and discovered during the Middle Ages by a princess of imperial blood, for which they expected the greatest veneration. The monks bowed profoundly and crossed themselves frequently before it, and reverently kissed the glass with which it is protected from the too rude salutations of the vulgar. This ugly portrait is, in fact, a bas-relief of poor execution, on a blackish wood, and does little credit to the skill of its reputed author. If authentic, it would seem to prove that St. Luke, besides being a wretched dauber, was a very inferior sculptor. Fortunately for the artistic reputation of the saint, there are tokens of its being a product of mediaeval times, as evident as are to be found in any portrait ascribed to the same source in the Italian churches. The brazen gates of the church, made at Jannina in Epirus, some seventy or eighty years ago, are of elaborate workmanship.
From the church we were conducted, through intricate corridors and dark stairways, to the kitchens, the baking-rooms, the refectory, and the wine-cellars — each department being on a scale commensurate with the size of the monastery and the number of its inmates. There were a number of large casks of wine in the cellar, the two largest, Stamato and Angelica, being enormous. Their exact capacity I can not tell; but the weight of the wine they could contain is estimated respectively at 40,000 and 60,000 pounds (16,000 and 24,000 okes). The wine kept here is all produced by the vineyards belonging to Megaspelion, and intended for home consumption. Not less than 160,000 or 170,000 pounds of wine are drunk at the monastery in the course of the year. Most of the revenues of the establishment are derived from the sale of the Corinthian currant, about 400,000 pounds of which are yearly sold by its agents. This year the crop has so signally failed, that the holy friars are in great trouble respecting their resources. 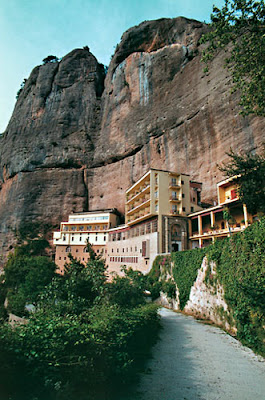 The library is contained in a small, dark room, and is kept perpetually under lock and key. There seemed to be about a thousand or fifteen hundred books and bound manuscripts; but in former times much larger and more valuable collections existed here. On two different occasions the library fell a prey to the conflagrations which reduced the monastery to ashes, notwithstanding the tutelar care of the sacred image of the "Panagia" in the chapel. The remaining manuscripts are principally transcripts of the Greek liturgical works and of the Gospels, and many of them are beautifully illuminated, after the manner of the Middle Ages. We could not examine the works critically in the short time at our disposal; but this had undoubtedly been done by others before us. It is a remarkable fact, that this small library is probably the largest collection of books to be found in any monastic institution in Greece; while the number contained in the monasteries of Mount Athos, in Turkey, though much larger, is not supposed to be very considerable. The incessant wars to which this fair but most unfortunate country has for ages been subject, the spoliations of western travelers, and the ignorance and carelessness of the inhabitants, all combined, are scarcely sufficient to account for such a total dearth of mediaeval literature.
We strolled through the gardens and along the hill-side for a fine view of the monastery, to commit to paper, while the "hieromonachus," who had been our chief guide, pointed out to us the elements of its strength, and narrated the most striking incidents of its history. In 1770, during the revolt in which the Peloponnesians madly involved themselves by giving faith to the lying promises of Russian emissaries, the wary monks stood aloof, and, indeed, lent their aid to the Turkish captives, multitudes of whom they fed, lodged, and sent in safety to their own homes across the Corinthian Gulf. This kindness proved the salvation of Megaspelion, and was amply rewarded by the protection extended to the truly philanthropic monks. 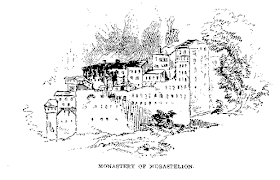 Such a course was no longer practicable when the flames of the Revolution of 1821 burst out, and the conflict was a struggle, not for mere political supremacy, but for national and individual existence. The question now to be decided, was whether a single Greek should be permitted to breathe; for a deep scheme had been laid by the Sultan and his advisers to annihilate every vestige of the Hellenic race, and replace it by a barbarous horde of Albanians and Turks, that should render more implicit obedience to the Porte's commands. It was, consequently, one of the objects of the Turkish generals to reduce this fortress, commanding so important a passage between the Gulf and the interior. But the monk pointed out with pride the spot where the intruders were met and repulsed by the "Pallecaria," or braves, collected by the monastery. On a former occasion, we were informed, the enemy had climbed to the top of the cliff overhanging the cave, whence they hurled down huge fragments of rock, with the intention of overwhelming the building; but the projecting ledges themselves protected it from injury. With superstitious reverence our guide directed attention to one large boulder on the verge of the impending rock, which seems to be just about to fall. The invader had, with much toil, conveyed it to its present situation; but the Virgin, the patron of the monastery, interposed her power, and miraculously secured it fast just as it was about to descend.
There are altogether some two hundred monks at present in the building, besides fifty more attending to the cultivation of their farms in different parts of the Morea. Their life is an easy one, and their accommodations are much superior to those of the common people, by the sweat of whose brows they live.