Agia Kori, the Wonderworker of Olympus

It should be stated from the outset that Agia Kori is not recognized as a Saint by the official Church, because there is no conclusive evidence for her life. We have neither her holy relics nor do we even know her name. Agia Kori is translated as "Holy Daughter" or "Holy Maiden". However, she is recognized as a Saint in the consciousness of pious Christians, who venerate her icon, visit her sacred shrine and testify to a multitude of her miracles.
Therefore what we do know about Agia Kori comes from oral traditions surrounding the Saint, which were compiled by the theologian and author Mr. Lazarus Tsakiridis. Though certain details conflict, the outline is basically the same. It is an undeniable fact that Agia Kori lived during the Ottoman era and even during the time of the tyranny of Ali Pasha of Epirus (1788-1822). She was of exceptional beauty, and this beauty aligned with the beauty of her soul, for she was adorned with the virtues of modesty, piety and chastity.
Although young in age, she was mature of mind, resisting all sweet pleasures that destroy youthful souls, and likely devoted her life to God. 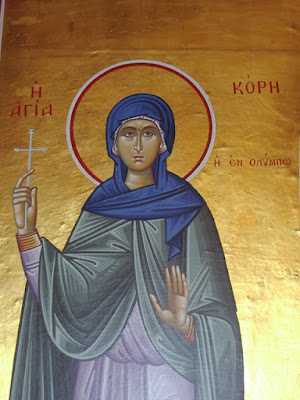 She probably came from a village of Ioannina. According to tradition, a spy of Ali Pasha saw Agia Kori, and amazed by her great beauty he wanted to hand her over to Ali Pasha. Ali Pasha thus ordered her arrest at her home to transfer her to his harem. But God did not leave her helpless.
Among those sent to arrest Agia Kori was a Greek who internally reacted against her capture, knowing who this virtuous girl was. At around midnight he secretly went to the village and told the girl that if she wanted to escape the Turks, who were coming to arrest her, she had to leave immediately. Thus she took an icon of the Panagia and left.
After many hardships, anxieties and sufferings she came to Olympus and took refuge in old Vrontou. We do not know if she made this journey alone. It is certain that among some villages of Epirus and Vrontou there was communication, because many from Epirus came and worked as loggers. She probably did not stay long in old Vrontou, because she had no security there. This is probably also why Agia Kori concealed her name and place of origin. However it seems Ali's emissaries found out about the location of the Saint, so she took refuge to the well-known gorge, where she dedicated herself to prayer.

During her stay in the gorge she discovered a cave where she hid. There she lived off cranberries and roots, but local ranchers may have approached her and fed her. Never did the Saint reveal her name or place of origin.
There is information that the abbot of Petras Monastery in Olympus would see a luminous Cross above her cave. He and some monks went to visit the spot and reached it with ropes. Following the Cross they came to the unknown girl, who was overwhelmed, bony and suffering. Moved by this the abbot asked why she came there. Weakened, she requested from him Holy Communion. As soon as she communed, a loud noise was heard. A rock had split and out from it came Holy Water. The discovery of the Saint by the monks reminds us of the story of Sts. Zosimas and Mary of Egypt.
After some time ranchers found Agia Kori dead and skeletal in the gorge. It is said the whole area was fragrant. They buried her there with reverence and respect. They also built her a shrine there, and very often visited and lit the oil lamps.
In time the site became a place of pilgrimage, and the Holy Maiden was recognized as a Saint in the consciousness of the faithful. This took place because those who drank from the Holy Water noticed that it had healing properties. Older people from 1940 say that at the shrine was also the icon of the Panagia the Saint brought with her. 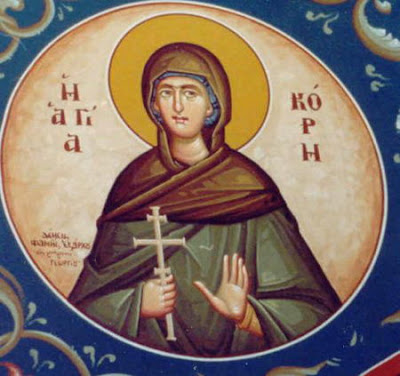 There used to also be some devotional habits of the pilgrims when visiting. First, when visiting the shrine the pilgrims were supposed to remain silent. And they would not return there on the same day. Lastly, because Agia Kori was a virgin, a man and woman were not to enter the shrine together, out of respect.
In Vrontou the older residents would also sing a song dedicated to Agia Kori:
Τούρκος τη ζητεί κόρη Ζαγοριανή.
Τούρκος την ζητεί κι αυτή δεν θέλει.
Όταν το έμαθε, αρχίνσε να κλαίει.
Μάνα μου σφάξε με, Τούρκο δεν παίρνω.
Πέρδικα γίνομαι, στα δάση μπαίνω.
Λουλούδι γίνομαι, στη γη φυτρώνω.

Of the many miracles attributed to Agia Kori, we will mention three:
1) A deaf woman from Corinth, in 1960, without knowing anything about Agia Kori, dreamed that in Olympus was miraculous holy water. Having sought it, she discovered it and, after much reverence prayed, then washed with the holy water. Soon she heard chirping birds and began to shout: "What am I hearing? What am I hearing?" When she left she passed through the village Vrontou. She went into the village cafe and testified to the miracle. Many of those who heard this spread the news.
2) A woman from Athens with paralysis in the neck and head bent, after having turned to many doctors and remained untreated, learned about Agia Kori. She visited her shrine full of faith and longing. They led her by the hand and descended the stairs to the holy water. While washing with the holy water she was healed.
3. Panagiotis Tsormatzidis from Katerini, in 1962 or 1963, saw that his little child George had an infection and his face was filled with pimples. Then with a group they went to Agia Kori and attended the Divine Liturgy. After the Liturgy the father washed his child's face many times with the holy water. They stayed all day at Agia Kori and at night returned home. The next day the pimples on the child's face disappeared. The few that remained totally disappeared in the following few days. Today that child is a monk.
Agia Kori is celebrated 50 days after Pascha, but nowadays the festival takes place on the next day, the day of the Holy Trinity. 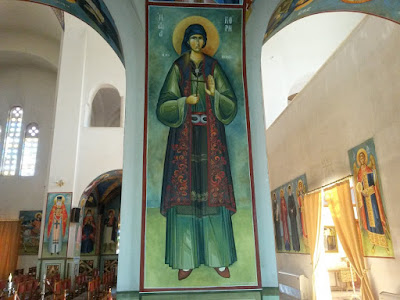 Apolytikion in the Fourth Tone
Your virginity, as a scapegoat of Christ, proved your courageous soul, hating the temporal; wherefore Agia Kori, you gush forth cures, to all who approach, your holy grave, and drink with faith, your holy water.
Megalynarion
Rejoice, Agia Kori Bride of Christ; rejoice, the divine shoot of Olympus and Ioannina; rejoice, you who heal diseases and eyes, and saves everyone from harm, as a beautiful maiden.
Source: Translated by John Sanidopoulos. 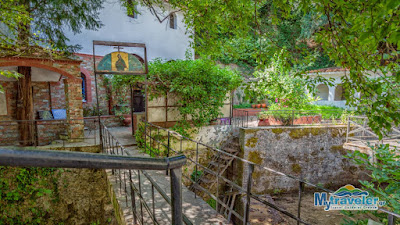 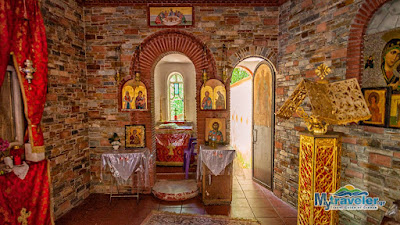