Synaxis of the Most-Holy Theotokos the Hodegetria

About the Icon
The Panagia Hodegetria or "Directress" icon depicts the Virgin Mary presenting her Son on her left arm to the viewer and with her hand she is gesturing towards Him, pointing to Christ as 'The Way'. Christ, on the other hand, has His right hand raised in a gesture of blessing with the index and middle fingers joined (to refer to the two natures of Christ) and his thumb locks over the other fingers (to signify the Holy Trinity).
The term 'Hodegetria' is Greek and translates to 'She who Shows the Way' or 'Directress' or 'Guide'. In this icon, although the Virgin Mary is the largest subject, the principal image in the icon is Christ. His presence is like that of an adult.
Typical features of the Hodegetria include the starburst on one or both of her shoulders and on the part of the blue mantle that covers the forehead. The fringe on the mantle indicates imperial status, as does the throne that is occasionally included in the image. The Virgin Mary's frontal gaze is also a key feature of the Hodegetria type.
The odd letters on the left and right and level with the top of the Virgin's head appear to be an adaptation of the usual inscription that occupies this position in other Hodegetrias: "MP θY" -- the first and last Greek letters of the Greek words for "Mother of God."
History
The prototype is said to have been painted by the Apostle Luke, according to the Megalynarion of the Supplication Service to the Theotokos:
"Speechless be the lips of impious ones, those who do not reverence your great icon, the sacred one which is called Hodegetria, and was depicted for us by one of the apostles, Luke the Evangelist."
The icon, which depicted the Theotokos full-figured holding Christ on one side and Christ Crucified on the other, was kept in Palestine and brought to Constantinople during the reign of Emperor Theodosius II the Younger, by Empress Eudocia, as a gift to Saint Pulcheria (399-453), the sister of Theodosius, who upon receiving it dedicated her life to one of virginity. Pulcheria established the Monastery of the Hodegon and placed the image within. There the icon was responsible for working many miracles, including saving Constantinople in 717 from the Arabs, but it was destroyed by the Ottomans when Constantinople fell in 1453 (today only a few ruins of the monastery are visible near Gülhane Park).
According to one legend, the icon received its name from a miracle of the Holy Virgin. The Mother of God 'appeared' to two blind people and taking them by the hand, she guided them to the famous monastery and sanctuary of the Hodegetria where she restored their vision. The sanctuary was built by Emperor Michael III (842-867), and it was called the Church of the Guide (Hodegon) because the army chiefs used to pray before this icon before they would leave for their campaigns. Since that time, the blind and all who suffer eye disorders would visit this church to wash their eyes so that they could be healed. This is one of the legends that has given this icon of the Panagia the Hodegetria a privileged place in not just the Eastern Orthodox Church but also the Western world.
By the second half of the 11th century, the Hodegetria became the best-known icon of Constantinople. From the 12th to the 15th centuries, pilgrims and travelers from various countries would convene every Tuesday when the icon was paraded through the city streets to bless the city and perform miracles. 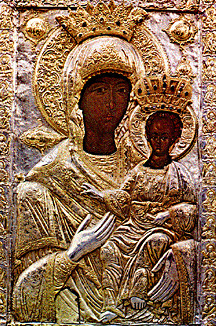 The Hodegetria Icon at Xenophontos Monastery
The Athonite Panagia Hodegetria measures approximately 19" high by 13" wide and has long been in the Katholikon of the Monastery of Vatopaidi, on the column of the left choir. In 1730, however, it suddenly disappeared from its place, although the gates of the Monastery were locked, and was found at the Monastery of Xenophontos. Everyone thought that someone had secretly stolen it, and so the icon was brought back to its old place, while the Vatopaidi fathers took stricter precautions and locked the church. A short while afterwards when the church was opened for service, the icon was again missing from its place, and soon afterwards news arrived from the Xenophontos Monastery that it was again in the same place in the Katholikon there. The Vatopaidi monks were now convinced that this was a miracle and determined to withstand the will of the Theotokos no longer. They hastened to Xenophontos to reverence the "Hodegetria," and for a long time afterwards used to send oil and wax for her in her new home.
Megalynarion
Come let us reverently venerate, the wondrous icon of the Hodegetria, from which divine grace comes as manna, forever nourishing the hearts of the faithful.