The Heretical Icon of the "Holy Family" 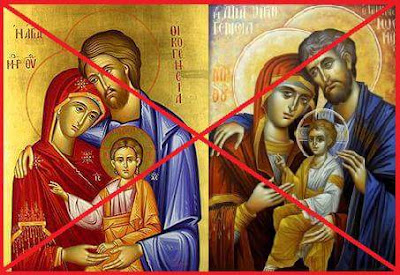 By John Sanidopoulos
The main reason Orthodox Iconography is more about imitation than innovation is to prevent heretical concepts from entering the Church, since heresy can just as much be depicted in icons as written in books and proclaimed from the pulpit. One such innovation in Orthodox Iconography that began in America is the depiction of the "Holy Family", showing Christ either in the arms of both St. Joseph and the Virgin Mary, or in the arms of St. Joseph alone. While such depictions may seem innocent, they in fact display a lack of attention to essential matters of Orthodox doctrine.
Such depictions of the "Holy Family" are based on innovations of Catholicism, which has in modern times instituted a Feast of the Holy Family. As one Roman Catholic scholar has remarked, in contrasting the Catholic feast centered on the Holy Family to the Christian Feasts of antiquity, “[The Feast of the Holy Family]...is a product of our modern age, the times to which we belong.”1 In traditional Orthodox Iconography, the Christ Child is properly portrayed, not alone with St. Joseph, but rather alone with His Mother, thereby stressing the dogma that He is “a Son without a father, Who was begotten of the Father without a mother before the ages.”2
In fact, to protect the faithful from an improper understanding of his fatherly role and his relationship to the Theotokos, traditional Orthodox Iconography downplays the figure of St. Joseph (without, of course, denigrating his person), just as the Church Fathers are also laconic when talking about him. For example, in the Icon of the Nativity of Christ, as Professor Constantine Cavarnos comments, “he is not shown at the central part of the composition, like the Theotokos and the Child, but away, at a corner, in order to emphasize the Scriptural account and the teaching of the Church that Christ was born of a Virgin.”3 Leonid Ouspensky and Vladimir Lossky, in their pivotal work on iconographic theory, make a similar observation: “Another detail emphasizes that in the Nativity of Christ ‘the order of nature is vanquished’—this is Joseph. He is not part of the central group of the Child and His Mother; he is not the father and is emphatically separated from this group.”4 Likewise, in Icons with similar themes, such as the Meeting of the Lord or the Flight into Egypt, Orthodox iconology does not understand St. Joseph to be the head of some sort of “Holy Family”; rather, he is seen as the Providentially-ordained guardian of the Theotokos and her Divine Child. His humble acceptance and virtuous fulfillment of this role are precisely the points of focus in his veneration by the Orthodox Church.5 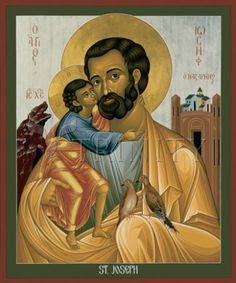 St. Augustine of Hippo further notes, “Joseph...might be called the father of Christ, on account of his being in a certain sense the husband of the mother of Christ...,”6 but he qualifies this admission by insisting that, in their spousal relationship, “there was no bodily connection.”7 Elsewhere he elaborates on this point: “And because of this conjugal fidelity [i.e., their mutual celibacy] they are both deservedly called ‘parents’ of Christ (not only she as His mother, but he as His father, as being her husband), both having been such in mind and purpose, though not in the flesh. But while the one was His father in purpose only, and the other His mother in the flesh also, they were both of them, for all that, only the parents of His humility, not of His sublimity; of His weakness [see II Corinthians 13:4], not of His divinity.”8 Thus, if the three are to be depicted in iconography together, they should be depicted fulfilling their divine purpose, rather than as a family according to the flesh.
St. Ambrose of Milan, again safeguarding the traditional Christian teaching about St. Joseph and his role as the husband of the Virgin Mary, warns us that by misunderstanding this particular biblical verse, “the snake of unbelief, released from perverse hiding places, lifts its head and vomits forth mischief from serpentine hearts.”9 One group of people this depiction of the "Holy Family" may particularly confuse are converts from Evangelicalism. Evangelicals claim to believe in the Virgin Birth, yet in large part reject the ever-virginity of the Virgin Mary, which means that they only accept this dogma of the Virgin Birth partially. Part of this has to do with the fact that Evangelicals consider marital domesticity the highest ideal of the Christian life, in sharp contradiction with Scripture and the Fathers who teach that the loftiest state of the Christian life is virginity, because it helps a Christian better focus on attaining their union with God. Like the notorious heretics as the Ebionites, Helvidius, and Jovinian, Evangelicals hold to the most-irreverent view that St. Joseph and the Virgin Mary engaged in physical intercourse after the birth of Christ, and by this means bore other children. St. John of Damascus calls those who hold such a view "enemies of Mary".10 Thus when Evangelicals convert to Orthodoxy and see such icons as the "Holy Family", it should be no surprise that such an image confuses them and may justify a retention of their previous heretical views.
The ever-virginity of the Theotokos is a basic presupposition for truly accepting the dogma of the Incarnation. As St. Gregory Palamas writes: "God deigned to receive our nature from us, hypostatically uniting with it in a marvelous way. But it was impossible to unite that Most High Nature, Whose purity is incomprehensible for human reason, to a sinful nature before it had been purified. Therefore, for the conception and birth of the Bestower of purity, a perfectly spotless and Most Pure Virgin was required."11 St. Basil the Great calls icons "the books of the illiterate". He says: "What better proof have we that images are the books of the illiterate, the ever-speaking heralds of honoring the saints, teaching those who gaze upon them without words, and sanctifying the spectacle. I have not many books nor time for study, and I go into a church, the common refuge of souls, my mind wearied with conflicting thoughts. I see before me a beautiful picture and the sight refreshes me, and induces me to glorify God."12 Now if an illiterate person enters an Orthodox church and sees an icon of the "Holy Family", how are they supposed to read it correctly without a lengthy interpretation? Rather, if an image gives off an obvious and immediate apparent falsehood or heresy, then it should be rejected lest it leads the innocent and simple astray. There is supposed to be perfect harmony between the written dogmas and the images that adorn our churches.
In the Orthodox Church, we have many holy families, such as Joachim and Anna with the Theotokos, Zechariah and Elizabeth with John the Forerunner, the family of Basil the Great, the family of Gregory Palamas, the family of Eustathios Plakidas. All these and many others are truly holy families that we should celebrate and depict in our churches, because they were families according to the flesh. On the other hand, the family of St. Joseph and the Virgin Mary with Christ, was not a family of the flesh, but as St. Augustine wrote, a family "of mind and purpose", who were brought together by a divine order to make sure Christ accomplished His work of salvation to redeem the human race.