Synaxarion of the Holy Infants Massacred by Herod 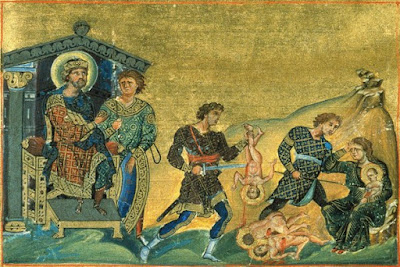 On the twenty-ninth of this month [December], we commemorate the Holy Infants killed by Herod, numbering fourteen thousand.
Verses
By a sword the mother's babes were killed untimely,
By the enemy of the Babe who fashioned the babes.
On the twenty-ninth the slaughtered infants called for pappa.
Since King Herod ordered the Magi to return, in order to inform him concerning the newborn King, Who was indicated by the star which they followed, that he may also go and venerate Him: then, because the Magi did not return to Herod, as they were ordered to do so by the Angel, they returned to their homeland by another way. I say this because of what follows, for Herod felt played by the Magi, and he became enraged and very bitter. Thus having in mind what the Magi told him, that the star appeared less than two years prior: for this reason he sent his soldiers to kill all the children of Bethlehem, all those that is who were under two years of age. He vainly thought that if he killed all the babes, certainly he would kill also He who was to rule in the future, in order that He not contrive against him. However, the mindless one in vain toiled so, not knowing that man can never thwart the will of God. Thus, for the infants, he brought about the Kingdom of Heaven. For himself, the wretched one brought about eternal hell.*

Notes:
* Note from St. Nikodemos the Hagiorite: "The relics (at least some) of these Holy Infants can be found in the Temple of Saint James the Brother of God in Constantinople, which was built by Emperor Justin." 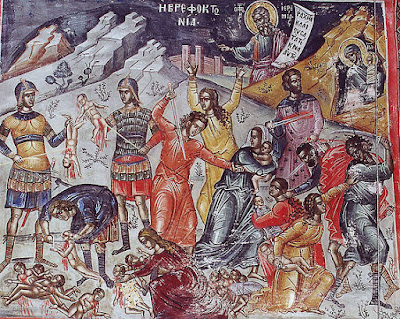 Apolytikion in the First Tone
As acceptable victims and freshly picked flowers, as divine first fruits and newborn lambs, you were offered to Christ Who was born as a Child, O most pure children. You mocked Herod's wickedness: now we beseech you, unceasingly pray for our souls.
Kontakion in Plagal of the Second Tone
The King was born in Bethlehem. The Magi came from the East with gifts. They had been guided by a star. But angry Herod mowed the children like wheat, lamenting that his power was destroyed.
Another Kontakion in the Fourth Tone
A star sent the Magi to the newly born Child, and Herod sent his army in vain. He was wanting to murder Him Who lay in the manger as an infant.