Synaxarion of the Holy Martyr Domna

On this day Saint Domna, who was decapitated with a sword, and perfected in fire.
Verses
Six like-minded virgins are joined together,
The falsely-foolish Domna is beheaded.
The Holy Martyr Domna lived during the reign of Maximian (284-305), and while living in Nicomedia, she was a priestess [consecrated virgin] in the palace temple, which had twelve idols to the gods, and it was called the Dodekatheon. Having come upon the Acts of the Holy Apostles and the Epistles of Saint Paul, her soul became enlightened, and having learned of the true faith, she believed in Christ. Wherefore she was baptized by Bishop Cyril of Nicomedia, together with the eunuch Indes. From then on, whatever money the blessed one received in the palace, she distributed to the poor. When the chief eunuch recognized that she was a Christian, and she was destined for punishment, she pretended that she was out of her mind and insane. Thus she was sent to the Bishop of the Christians, to be healed of her insanity. Whence the Saint found herself to be among the Christians, so she entered a hermitage for Virgins, and lived there in quietude.
When Maximian returned from his journey victorious over the Ethiopians, he asked for Domna. Upon learning that she became insane, he became very saddened. After his frenzy, he forgot about the madness of Domna, and asked for her again. For this reason the Saint, afraid that he might find her, was dressed in men's clothing by the abbess of the hermitage she lived in. And accompanied by the prayers and tears of the Virgins, she secretly left the hermitage. However, because the sinful Maximian sought Domna and could not find her, he raged against all the hermitages in that area, and he destroyed them and made them disappear. And the Virgins of these hermitages, were disgracefully given to be dishonored by the soldiers. But Christ, who was born of a Virgin, did not allow the bodies of those dedicated to Him to be dishonored. Rather He redeemed them by a miracle from the hands of the unbridled ones. 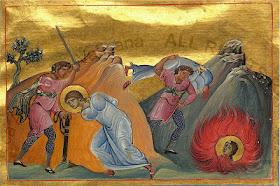 Because the tyrant ordered the burning of twenty thousand Christians in the church, he ordered those who were not burned to be tormented with various tortures. When Saint Domna learned of this, she rejoiced, and rushed to imitate the Holy Martyrs. Wherefore she descended from the mountain to the sea in the guise of a man, and seeing certain fishermen retrieving the relics of Saints who had been cast into the sea: namely Indes and Gorgonios and Peter, she looked upon these relics as holy, and with the clergy she took them and hid them in the walls of the city of Nicomedia. After being betrayed to Maximian, he ordered first that the blessed one be beheaded, and then for her body to be burned.