Synaxarion of the 20,000 Martyrs of Nicomedia 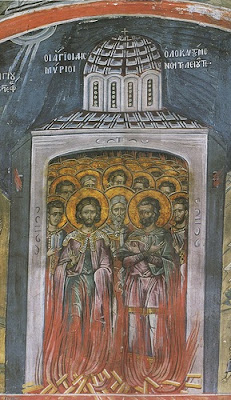 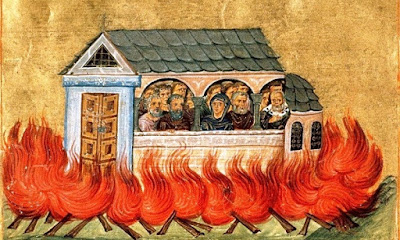 When Emperor Maximian (284-305) returned as victor from the war against the Ethiopians in the year 304, he wanted to make a sacrifice before the idols for this victory. Letters were therefore sent everywhere urging all to come to Nicomedia, to venerate his gods. Then Saint Anthimos, Bishop of Nicomedia, gathered all the Christians within the church. It happened to be the feast of the Nativity of Christ. So they celebrated together, and he taught them the true faith. When Maximian heard of this, he ordered dry sticks and wood to be placed around the church to be lit, so that the Christians could be set aflame within the church. When the Holy Bishop Anthimos was informed of this, he made haste one hour before to have all the catechumens baptized. And after celebrating the Divine Liturgy, he communed everyone of the divine and immaculate Mysteries. Hence the dry sticks were lit, and all the Christians within the church were burnt alive. They were twenty thousand in number. However, Saint Anthimos was not burnt, but remained unharmed by divine grace. This was done in order to benefit others through his teaching, and to baptize them, offering them as saved to Christ. This was also done in order that he may suffer more, and in this way to pass over to Christ, with greater boldness and glory, and thus gain the Kingdom. On the third of September this renowned man received the crown of martyrdom, and it is on this day that his feast is kept.*
* "At this time Anthimos, who then presided over the church in Nicomedia, was beheaded for his testimony to Christ. A great multitude of martyrs were added to him, a conflagration having broken out in those very days in the palace at Nicomedia, I know not how, which through a false suspicion was laid to our people. Entire families of the pious in that place were put to death in masses at the royal command, some by the sword, and others by fire. It is reported that with a certain divine and indescribable eagerness men and women rushed into the fire. And the executioners bound a large number of others and put them on boats and threw them into the depths of the sea. And those who had been esteemed their masters considered it necessary to dig up the bodies of the imperial servants, who had been committed to the earth with suitable burial and cast them into the sea, lest any, as they thought, regarding them as gods, might worship them lying in their sepulchers. Such things occurred in Nicomedia at the beginning of the persecution." (Eusebius, Ecclesiastical History, Bk. 8, Ch. 6.)
Read also:

Synaxarion of the Holy Martyr Domna

Apolytikion in the Second Tone
Champions of the Lord, blessed is the earth that was soaked with your blood and holy the tabernacles which received your spirits; for in the stadium your crushed the enemy and proclaimed Christ with boldness. Implore Him, as He is good, we beg, that our souls may be saved.
Apolytikion in the Third Tone
As a divine array, a holy city, a chosen people of the Lord, refreshed by His love you endured contest by fire, O Twenty Thousand Martyrs. We beseech you, entreat the Compassionate God to grant us His great mercy.


Kontakion in the First Tone
An host that numbers twice ten thousand Martyrs dawns like beacon fire that never sets, enlightening through faith the hearts and minds of the devout; for aflame with divine love of the Master, the noble Martyrs fervently accepted a perfect end through fire.

Kontakion in the Second Tone
Strong in the Faith, the Twenty Thousand holy Martyrs accepted suffering by fire. They cried to Him Who was born of the Virgin: Accept our offerings like the gifts of the Magi - gold and myrrh and frankincense.