Synaxarion of the Holy Prophet Daniel and the Three Children Ananias, Azarias and Misael 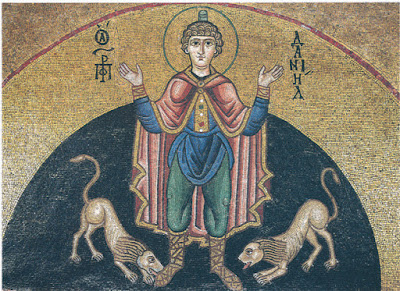 On the seventeenth of this month [December], we commemorate the Holy Three Children Ananias, Azarias and Misael, and Daniel the Prophet.
Verses
To Daniel
Now you see God in reality on His throne,
Being beheaded Daniel, and not in a vision as of old.
To the Three Children
The Three Children shed their blood in a foreign place,
Like the fire beforehand, now they are led to the sword.
On the seventeenth Daniel was beheaded, who sees the future.
The blessed Daniel the Prophet was from the royal tribe of Judah, of the family of those prominent in the royal service. He was born in Upper Beth-horon. While he was still an infant, he was brought as a slave from Judah to Babylon, and there he prophesied for seventy years. The Birth of Christ he foretold four hundred and sixty years beforehand. He was a man of such chastity, that the Jews thought he was a eunuch. And he lamented much over the slavery of his fellow Jews. It was also his desire to fast from all foods. Though his bodily appearance was lean, he was very good looking by the grace of God above.
The Holy Three Children were from the Holy City of Jerusalem, the sons of Hezekiah the king, and their mother was Kalliniki. Their father Hezekiah became ill and said to God with tears, to guard them and have them be pleasing before Him, which is why he was given an additional fifteen years to his life. When the city of Jerusalem was enslaved under Nebuchadnezzar, King of Babylon and Assyria, these Three Children were taken as slaves to Babylon, together with Daniel the Prophet. There they were positioned over the affairs of the king because of their virtue and prudence, as well as through the mediation of Daniel. Because they turned away from the golden image of the king which he ordered everyone to worship, and which was in the plain of Dura, they were cast into a furnace, which burned sevenfold. There they were cooled off by the descent of the divine Angel, and chanted the universal hymn, inviting all of creation to glorify God. When the king saw this strange miracle, he confessed that God was great and he worshiped Him. 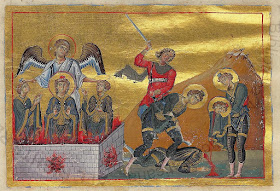 Meanwhile the divine Daniel, although he lived and ate with the above Three Children, and was the cause for their honorable position through his mediation, as we mentioned, he was not placed with them in the furnace. Holy Scripture does not mention this. The reason he was not cast into the furnace, as it appears to me and to be the truth, is that King Nebuchadnezzar gave Daniel the name Belteshazzar (Dan. 5:12), because this name was a recognition of prominent honor and the name of God (Dan. 4:8). Because the name of Daniel was the name of God, for this reason, so as not to appear to the Persians, who thought God was fire, that the flame of the furnace was cooled by a Babylonian god, that was called Belteshazzar, therefore Divine Providence economized that the Prophet Daniel not be cast into the furnace with the Three Children, since he bore this name. Neither in the history of the narration of the furnace is Daniel referred to. The other Three Children, who were redeemed in a strange and supernatural manner from the fire of the furnace, were restored once again to their former glory. And having passed their life honorably, they were perfected in peace together with the Prophet Daniel.
It is also said, that after the death of Nebuchadnezzar, and the other kings who honored the Three Children, another king arose named Atticus. After examining these three Saints for their impiety, he ordered that Saint Misael be beheaded, but Saint Azarias put out his robe and caught his head. Saint Azarias was also condemned to be beheaded, but his head was caught by the divine Ananias. Then Ananias was also beheaded. It is also said that after the heads of the three were struck off, they once again became connected with their bodies. An Angel of the Lord then took their relics and brought them to Mount Gebal, and placed them there beneath a rock. After four hundred years, they arose with other forefathers, when the Lord arose from His tomb. Then they died again.
Their Synaxis is celebrated in the most holy Great Church. We received from the God-bearing Fathers to celebrate their memory seven days before the birth according to the flesh of our Lord and God and Savior Jesus Christ. This is because, I think, they were from the royal tribe of Judah, from which our Lord came from as a man. 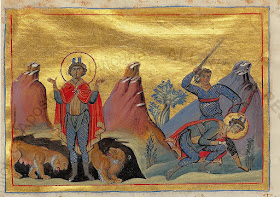 Apolytikion in the Second Tone
Great are the achievements of faith! In the furnace of flame, as by the water of rest, the Three Holy Children rejoiced. And the Prophet Daniel proved a shepherd of lions as of sheep. By their prayers, O Christ our God, save our souls.
Kontakion in the Third Tone
Since your pure and hallowed heart had been made pure by the Spirit, it became His dwelling-place and clearest prophecy's vessel; for you did behold things far off as near and present, and when cast into the den, you did muzzle lions; for which cause, O blessed Prophet, glorious Daniel, we all revere you in faith.
John at 2:59:00 PM
Share
‹
›
Home
View web version