The Relics of the Prophet Daniel in Constantinople 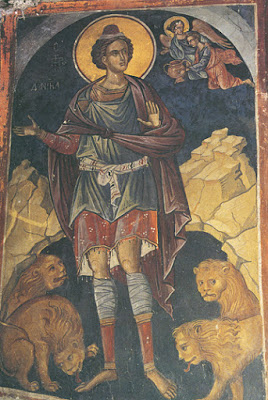 It is said the relics of the Prophet Daniel came to Constantinople in the fourth century by St. Helen, the mother of Constantine the Great, after collecting Christian relics in the Holy Land. They were placed in the Church of Saint Romanos the Martyr (a third century Martyr from Antioch commemorated on Nov. 27th) near the Romanos Gate of the land walls (the modern Topkapi Gate). It is maintained that this church was established by St. Helen herself before her death, but others say it may be a late fourth century structure. Some sources call this church the Church or Monastery of Saint Daniel.
The relic of the Prophet Daniel was specifically in a reddish marble sarcophagus, supported by two lions, in an underground crypt beneath the church accessed by going down twenty-five stairs while holding a lamp. At the head and also at the foot of the sarcophagus were two stone angels in the guise of children (commissioned by Emperor Leo VI), prostrating before the body of Daniel. The tomb of Daniel was on the right-hand side, and that of St. Niketas the Martyr (who is commemorated with the Prophet Daniel on Dec. 17th) on the left side. In the sanctuary was the tomb of St. Romanos the Martyr.
These facts are testified to us by late medieval Russian pilgrims to Constantinople. According to two fourteenth century Russian pilgrims, the so-called Russian Anonymous and Steven of Novgorod, it was here that "the people receive a seal for their journey", the "seal of the Prophet Daniel." These were most likely tokens or medallions in the form of a seal with an image of the Prophet, given as a souvenir for having visited the shrine. In the West, the fourteenth century poet Manuel Philes, devotes a few short poems to Daniel's tomb in Constantinople, and the twelfth century Gesta regum Anglorum of William of Malmesbury also lists the body of Daniel the prophet among the relics preserved in Constantinople.
Read also:
Russian Travelers to Constantinople in the Fourteenth and Fifteenth Centuries
A Medallion of the Prophet Daniel in the Dumbarton Oaks Collection
John at 5:59:00 PM
Share
‹
›
Home
View web version