Synaxarion of Saint Dionysios the New of Zakynthos

Our Holy Father Dionysios the New, who came from Zakynthos, and became Archbishop of Aegina, was perfected in peace.
By St. Nikodemos the Hagiorite
Verses
Leaving the earthly, now he dwells in the heavens,
The boast of Zakynthos, Dionysios the New.
+++
The earth has the body of Dionysios the New,
And his soul is carried away to Heaven.
On the seventeenth the renowned Dionysios died.
Our Holy Father Dionysios came from the island of Zakynthos, the son of wealthy and noble parents, Mokios Sigouros and Paulina Valvi. Having been taught sacred letters, and by this was enlightened to recognize the vanity of this present world, then he turned away from pleasure, wealth, glory and every other enjoyment of this present life, and he withdrew from his homeland of Zakynthos, going to the sacred Monastery of Strophades, which is located opposite Zakynthos, at a distance of about forty miles. There the thrice-blessed one became a Monk, giving himself over to the spiritual struggles of the monastic state, in fasting, vigils, prayers, pursuing all the virtues, in a way that he excelled over all the Fathers of the Monastery, even the most virtuous and elderly. He especially struggled to acquire humility. Thus, although he was from an illustrious family, he considered himself the least and most unworthy of all. Wherefore due to this virtue he was elevated to the office of the Priesthood, being ordained to the order of Reader, Subdeacon, Deacon and Presbyter.
Desiring to go to Jerusalem to venerate the Holy Lands, he received permission from the brotherhood, and he passed through the Dodecanese, to reach Jerusalem easier. Going around those islands, he also went to Athens. There he was called by the Archbishop of Athens, and became the Archbishop of Aegina, which at that time was widowed of an Archbishop. But due to his fame being proclaimed everywhere, and everyone ran to listen to his mellifluous teachings, for this reason the renowned one became frightened, lest the praises of men make him fall into arrogance. Therefore he placed his successor on his throne, and he returned to his homeland of Zakynthos in the year 1589. His leadership was received as timely, because they were without a Bishop. There he established the Monastery of the Theotokos, which is called Anafonitria, which was convenient for quietude, and there he settled, and he occupied himself in the honey of hesychasm. 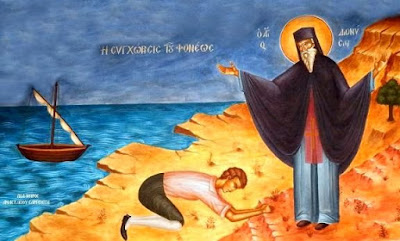 Due to the attainment of his exceeding love for God and for neighbor, the renowned one not only showed mercy to the poor from the income of his Monastery, but he even successfully made them prosper, which is something that is difficult to find among the Saints. Constantine, the brother of this Saint, was murdered by a brutal man, and this murderer was banished by his relatives, and walked about in deserted places. Wherefore, though I do not know how, he fled to the Monastery of the Saint, not knowing that the Venerable One was the brother of the one he murdered. When the Saint saw that he was terrified, he asked about the cause of his fear. He then said that he killed Constantine Sigouros. Then the Venerable One lamented and wept for the death of his brother, but in imitation of the forbearance of the Master Christ, he encouraged the murderer with words of consolation. And befriending him in all friendliness, he hid him in a secret place. Not long after the relatives of the Saint came and informed him of the unjust death of his brother, and they sought the murderer, but the Saint informed them that he did not know his whereabouts. When they withdrew, he accompanied the murderer to the seashore. There he gave him food, and sent him off to another land in order to spare his life.
Through such virtues and actions, the Saint was found worthy to receive from God the power to work miracles, and to perform strange wonders. Once he wished to cross a river, and seeing that the current was strong, O the wonder!, he stopped the current, and crossed over with the Deacon that accompanied him. The body of a dead woman that was bound by excommunication, he released through the prayer of forgiveness, and as if she was alive, she bowed her head before the Saint, then her body fell to the ground and dissolved on the spot. By his word he helped certain seamen catch fish, in the place where they previously caught none. Not only did the Venerable One have the gift of working miracles, but he also had the gifts of clairvoyance and foresight, and also those things which took place far away he was able to see. With these gifts his life was made luminous, and in this state he surrendered his holy soul into the hands of God, in the year 1624, on this the 17th of December. His holy relic was entombed in the aforesaid Monastery of Strophades. After some time passed, the Saint was returned after a revelation from the Saint, and from his tomb - O the miracle! - he was found to be preserved and whole, and gave off a heavenly fragrance. This has worked and continues to work many miracles for those who approach him with faith. Today he can be found in his homeland of Zakynthos, where he is venerated with reverence. 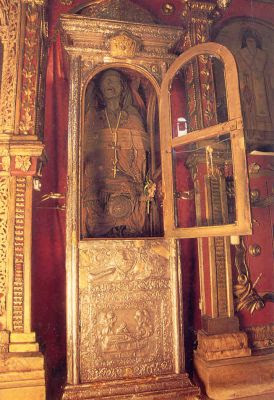 Apolytikion in the First Tone
The offspring of Zakynthos and president of Aegina, and the protector of the Monastery of Strophades, let all us the faithful honor with one accord Dionysios. And let us cry unto him sincerely: By your prayers save those who celebrate your memory and cry unto you: Glory to Christ Who has glorified you; glory to Him Who has made you wondrous; glory to Him Who has granted you unto us as an unsleeping intercessor.
Kontakion in the Third Tone
The city of Zakynthos celebrates today, a joyful feast with the Monastery of Strophades, inviting those of Aegina and the Cyclades, that together they may worthily praise with gladness and joyously celebrate, their common boast, Dionysios.
Megalynarion
You are the treasure of Strophades, and the city of Zakynthos your revered relic enriches, by the working of miracles, to the crowds of the pious, O Dionysios.
John at 11:26:00 AM
Share
‹
›
Home
View web version