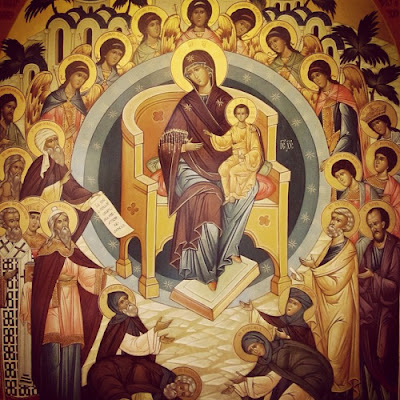 On the twenty-sixth of this month [December], is the Synaxis of the Most Holy Theotokos.
Verses
Blamelessly giving birth without knowing a man in the marriage-bed,
As a blameless gift we welcome the words.
Dance and sing on the twenty-sixth for the most-pure birth-giving. 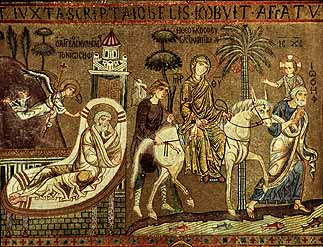 We also commemorate the flight of the Most Holy Theotokos to Egypt.
Verses
Coming towards you is He Who struck you with terror in days of old,
Egypt shudders understanding this to be God.
When Herod issued a decree to have all the children of Bethlehem killed, an Angel of the Lord appeared in Joseph's dream saying: "Rise up and take the child and His Mother, and flee to Egypt." Therefore the Theotokos fled to Egypt with the Infant for two reasons, to fulfill the words spoken by the Prophet Hosea: "Out of Egypt I called My Son" (11:1), and also to silence the mouths of all heretics. For if the Lord did not flee, He would be captured by Herod and killed, preventing the salvation of men. Or else if not killed in order to complete the economy, He would appear to many that He did not wear human nature in actuality and truthfully, but only as an apparition or fantasy. For if He truly wore flesh, of course He would be cut with the sword. Thus the miserable heretics have dared to say this, that the Lord was born according to fantasy, as is said by the God-slayer Mani and his Manichean followers. How much they would want to say this if they had a reason? Therefore the Lord fled to Egypt for these two reasons. And also to destroy the idols found in Egypt.*

Notes:
* "At Hermopolis, in the Thebade, is a tree called Persis, of which the branches, the leaves, and the least portion of the bark, are said to heal diseases, when touched by the sick; for it is related by the Egyptians that when Joseph fled with Christ and Mary, the holy Mother of God, from the wrath of Herod, they went to Hermopolis; when entering at the gate, this largest tree, as if not enduring the advent of Christ, inclined to the ground and worshiped Him. I relate precisely what I have heard from many sources concerning this tree. I think that this phenomenon was a sign of the presence of God in the city; or perhaps, as seems most probable, the tree, which had been worshiped by the inhabitants, after the pagan custom, was shaken, because the demon, who had been an object of worship, started up at sight of Him who was manifested for purification from such agencies. It was moved of its own accord; for at the presence of Christ the idols of Egypt were shaken, even as Isaiah the prophet had foretold. On the expulsion of the demon, the tree was permitted to remain as a monument of what had occurred, and was endued with the property of healing those who believed." (Sozomen, Ecclesiastical History, Bk. 5, Ch. 21.) 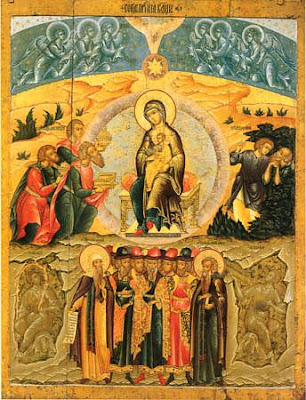 Apolytikion in the Fourth Tone
Your Nativity, Christ our God, has made the light of knowledge dawn on the world, for by it those who adored the stars were taught by a star to venerate You, the Sun of righteousness, and to know You the Dayspring from on high. Lord, glory to You.
Kontakion in Plagal of the Second Tone
He that was born before the morning star of Father without mother, is today incarnate on earth of you without father. A star tells the glad tidings to the Magi; while Angels and Shepherds praise your seedless childbirth, O you who are full of grace.