Jesus Christ as an Immigrant 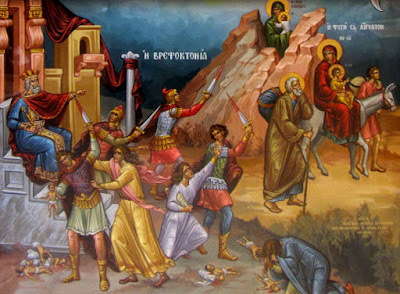 By Prof. John Karavidopoulos
The birth of Christ is described by the Evangelist Matthew in a way that indicates the fate of the Messiah of the world: As soon as He is born He migrates, following a divine command, to Egypt. He is an immigrant Who changed countries to escape danger, just as in the Old Testament Abraham, Jacob and his children did, who migrated to Egypt by divine command. The newborn Christ, as soon as He enters the world, knows persecution and hostility on the part of the rulers. The main representative of this hostility is King Herod, whose brutality is known by the historians of his time. One could say that the birth of Christ is a prelude to the death of Christ. His entire journey through life in this world is a cross of love and sacrifice; a cross on which He will ultimately defeat the demonic power of evil in order for the light of the resurrection to shine.
While it may seem cosmic destructive forces dominate over humanity, their prevalence is apparent and temporary, because within history the redemptive plan of the divine economy takes place, which no one can subvert or defeat. The brutality of Herod, manifested by the inhumane slaughter of infants in Bethlehem and the surrounding area, could not have stopped the work of the newborn Messiah from beginning, since He was under the protective care of God. The reference to the slaughter of infants, for which the Gospels do not specify a number, are the beginning of the martyrs of the faith. The excessive number of our liturgical tradition, estimated at 14,000 infants (a doubling of the sacred number seven, multiplied by 1000) shows in advance the many martyrs of Christianity. This number is excessive for little Bethlehem, even with its surroundings, which is why the symbolic character we received above is necessarily incumbent.
That the Providence of God the Father protects the Divine Infant from the threatening fury of the secular ruler, that He is guided to a safe place and is informed beforehand of the possibility of a return to His homeland gives an element of optimism in facing the risks of life. We each probably have our own personal story of a shocking experience that the hand of God protected us from and saved us from certain death, either leading the footsteps of a friend or protector to our aid, or illuminating us to act properly, or deal with someone another way. This leads to our great distrust or rationalism to being crushed before the indestructible power of this experience. Besides the Magi were warned by God to "return to your homeland another way" (Matt. 2:12), showing that God enlightens people to behave wisely and avoid unnecessary risks. When we are at a dead end, we should think there is another way.
The optimistic message of the Gospel reading for the Sunday after the Nativity of Christ, is that despite the apparent triumph of evil, hatred and atrocities in the history of mankind, eventually the power of love and goodness wins. That God was born as a man in history is proof of the loving concern of God to redeem man from the demonic forces of destruction and annihilation.
Source: Translated by John Sanidopoulos.