Synaxarion for the Nativity of Christ, the Veneration of the Magi and the Shepherds Who Beheld the Lord 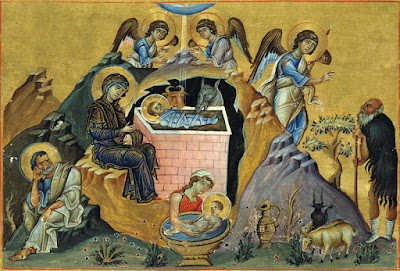 On the twenty-fifth of this month [December], we commemorate the Nativity according to the flesh of our Lord, God and Savior Jesus Christ.
Verses
God the one born, and the Mother a Virgin,
What greater new thing had creation seen?
Mary the Virgin bore God on the twenty fifth.
When the philanthropic God beheld the race of men, how they were tormented by the devil, He felt compassion. Therefore He sent His Angel Gabriel, and through him sent a message to the Theotokos with the "Rejoice, you who are full of grace, the Lord is with you." And she said the "Behold, the servant of the Lord, be it done to me according to your word." Upon this the Son and Word of God, our Lord Jesus Christ, was immediately conceived in her immaculate and virginal womb. When the nine months of her conception was near its end, a decree went out from Caesar Augustus, for a census to take place throughout the inhabited world that was under his authority. For this census to take place, the governor Cyrenius was sent to Jerusalem. At this time Joseph the protector of the Theotokos together with the Theotokos herself went to Bethlehem, in order to be registered there. And because the Virgin was about to give birth, they could not find a dwelling place to stay in, due to the multitude of people that gathered there, and they were not on time to find a house to settle in Bethlehem. For this reason they entered a poor cave. There she incorruptibly gave birth to our Lord Jesus Christ, and being an Infant He was wrapped in swaddling clothes, He Who created the world. And He was placed in a manger of irrational animals, for He came to liberate us from our irrationality. 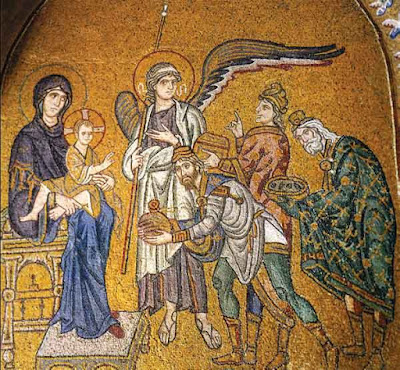 On this day, we commemorate the Veneration of the Magi.
Verses
A company of men from the nations venerated you, O Word,
Showing your future reverence from the nations.
In the time of the Prophet Moses there was a diviner named Balaam, who dwelt in the area of the Persians, and with many other things that he divined and foretold, he said also this: "A star will come out of Jacob; a scepter will rise out of Israel" (Num. 24:17). Therefore this prophecy was remembered by inheritance by the other diviners and magi of the Persians, and it was even taught to the kings of Persia. Wherefore they observed when this star would appear. As astronomers, therefore, they saw where it was, and how it made no movement East to West, as other stars tend to do, but from the constellation of the bear to midday, that is to say from north to south (in that Persia is to the north), which struck their curiosity, and so they recognized that clearly a great king has been born. Therefore they followed the star, and came to Jerusalem, saying: "Where is the King of the Jews that has been born? Upon hearing this, Herod became agitated. And he gathered all the high priests and scribes of the Jews, asking to find, "Where in Scripture does it say Christ would be born?" They told him, "In Bethlehem of Judea." Then he secretly called for the Magi, saying to them: "Go and find out about this child, and when you find him, reveal him also to me, that I may also come and venerate him." This he said deceitfully, in order to find out where he was, so that he may send men there to kill him.
The Magi found Christ through the star, and they fell down and venerated Him. And opening up their treasures, they offered Him gifts, gold and incense and myrrh. And after they venerated Him, they returned to their land, without returning to Herod to deliver the news. For an Angel of the Lord appeared in their sleep, and informed them that they should do this. Wherefore Herod, seeing that he was made a mockery by the Magi, sent soldiers to have all the children of Bethlehem killed, all who were less than two years old. For this reason an Angel was sent by God to Joseph and said to him: "Rise up and take the child and His Mother, and flee to Egypt." Joseph did as the Angel ordered, and they went down to Egypt. These things are recorded by Matthew the Evangelist in the second chapter. 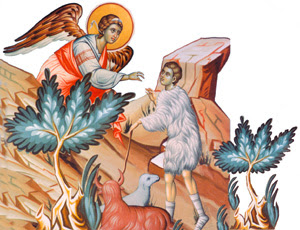 On this day, we commemorate the Shepherds who beheld the Lord.
Verses
The Shepherds left their own flock behind,
To see Christ the Good Shepherd in haste. 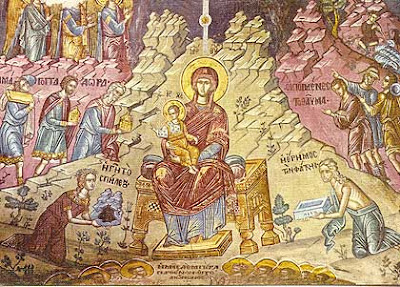 Apolytikion in the Fourth Tone
Your Nativity, Christ our God, has made the light of knowledge dawn on the world, for by it those who adored the stars were taught by a star to venerate You, the Sun of righteousness, and to know You the Dayspring from on high. Lord, glory to You.
Kontakion in the Third Tone
Today the Virgin gives birth to Him who is above all being, and the earth offers the Cave to Him Whom no one can approach; Angels with Shepherds give glory, and Magi journey with a star; for us there has been born a little Child: God before the ages.
The Oikos
Bethlehem has opened Eden, come, let us see;
We have found delight in secret, come let us receive
The joys of Paradise within the cave;
There the unwatered root has appeared whose blossom is forgiveness,
There has been found the undug well
From which David once wished to drink;
There a Virgin has borne a babe
And has at once quenched Adam’s and David’s thirst.
For this let us hasten to this place where there has been born
A little Child: God before the ages.
John at 10:13:00 AM
Share
‹
›
Home
View web version