By Panagiotis Melikidis
On February 15th our Church celebrates the memory of the Apostle Onesimus, who became a Christian through the Apostle Paul when he was a prisoner either in Rome or Ephesus (probably Ephesus, according to modern research).
This brief note will deal with the subject of slavery and its correlation with the case of Onesimus.
First let us note that in the era of Emperor Augustus, half the population of the Roman Empire were slaves. Furthermore, based on the testimonies we have, the living conditions of the slaves were harsher in the West than in the East. For this reason, for example, in 1 B.C. we have the revolt of the slaves in Italy.
The slave was under the absolute authority of his master and had no rights, not only in public but also in religious life. We need only understand that marriage between slaves was not a normal contract, but a simple union, which means that the master could, whenever he wanted, divorce his slave from his wife and children.
The harsh living conditions, and due to the fear of the Roman authorities for possible rebellion because of their large number, pushed many slaves to escape, demanding better living conditions. But once they became fugitives then began the food and shelter problems, since they were considered fugitives. Already there was a special corps of the Roman Empire which was intended to identify fugitives (the so-called fugitivari). If arrested their sentences varied depending on the case: it ranged from a simple branding on the forehead all the way up to crucifixion.
From the case of Onesimus, who was a fugitive slave, and based on the letter to Philemon by the Apostle Paul, we can deduce the following: Philemon was a Christian from Colossus of Asia Minor. In his house were celebrated liturgical gatherings and the Apostle Paul even commends him for his extensive philanthropic work. Onesimus was a slave of Philemon, and having committed an offense (probably theft) he became a fugitive, and under unknown to us conditions he met with the imprisoned Apostle Paul probably in Ephesus. There, after he repented, he became a Christian. Paul, even though he wanted to keep him as a partner in spreading the gospel, provided him with a letter to return back to his master and to be received with a positive stance. 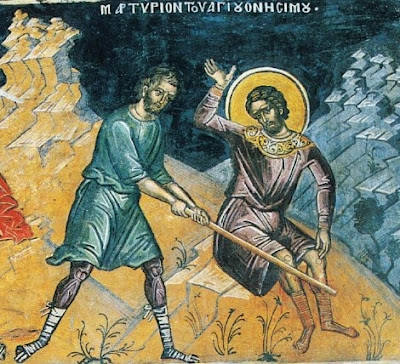 Some researchers accept that eventually Philemon allocated Onesimus to Paul, and some even identify him as the Bishop Onesimus of Ephesus mentioned by Ignatius in the second century in his letter to the Ephesians.
According to other information, Onesimus became Bishop of Beroia and was martyred by the eparch Tertillus (Apostolic Constitutions 7.46).
Our Church honors him also on November 22nd along with Philemon.
Sources:
Savas Agourides, "History of the Years of the New Testament," Introduction to the New Testament, I. Karavidopoulos.
Source: Ekklesiastiki Paremvasi, "Ονήσιμος", January 2005. Translated by John Sanidopoulos.
John at 8:22:00 AM
Share
‹
›
Home
View web version