Elder Ambrose Lazaris: "Marriage Is Like A Row Boat" 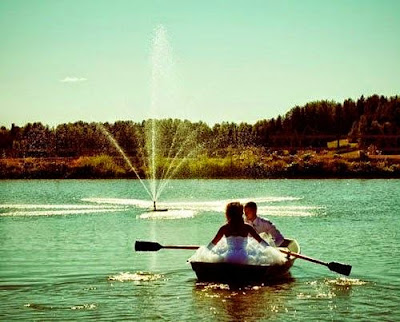 When a certain man with his wife visited the Monastery [Dadiou] for the first time, they had the following experience with the Elder [Ambrose Lazaris], who of course knew nothing about them previously.
They greeted him, received his blessing, and stayed silently beside him for a little while. Eventually he asked them their names. Then, suddenly, he said to the husband:
"Your hands and feet will be cut off!"
The surprised visitor barely managed to murmur:
"Why, Elder, will my hands and feet be cut off?"
"Why do you yell at her?" he asked him sternly, but in a strange beautiful way, while indicating to him his wife.
"Yes, yes Elder, tell him," she happily said, after such an important figure took her side.
The man was shocked. He realized instantly that it was a mistake to carry into the house the stress of work and to take it out on his wife unfairly, and he lowered his head. Within him everything turned upside down.
Then the Elder, having seen the husband changed, since he understood he was the culprit, completely changed his behavior and stretched out his hand and patted the husband on the head.
"My child," he told him tenderly, "when you are on a row boat...have you ever been on a row boat?"
"Yes, Elder, I have been on one," stammered the disgraced man.
"Have you ever paddled?"
"I have."
"With how many paddles?"
"With two."
"Have you ever rowed a boat with one paddle?"
"No."
"If you row a boat with one paddle, where will you go?"
"I don't know."
"You will go round and round, you clod, like this. It is the same with your wife. If you paddle alone, you won't go anywhere.
You are both a row boat, your marriage is like a row boat and you have been released into the ocean. To reach the port, you must both paddle. If you paddle alone, it won't happen. You understand?"
From Γέρων Αμβρόσιος Λάζαρης – Ο Πνευματικός της Μονής Δαδίου (Elder Ambrose Lazaris - The Spiritual Father on Dadiou Monastery), Κυριακίδη, p. 165. Translated by John Sanidopoulos.
John at 6:31:00 PM
Share
‹
›
Home
View web version