Saint Damian, born around 1510 and a native of Myriochovos (known today as Agia Triada) in Thessaly, became a monk in his youth at the Monastery of Philotheou on Mount Athos. Some years later he embraced the eremitic life under the direction of Domitian, an ascetic endowed with much grace. After three years of contests in all the monastic virtues, he heard a divine voice saying to him, "Damian, you must seek not only your own profit but that of others as well." So he left the Holy Mountain in order to preach the word of God in the villages around Mount Olympus in Thessaly, and then in the region of Kissavos, of Larissa and of Agrapha. He taught the Christians to remain firm in the Faith and, despite Turkish oppression, to live according to the commandments of God.
When the devil incited certain people to reject his preaching in the area of Mount Olympus, accusing him of being a false monk and a deceiver, he went to Agrapha. There, in Karitsa Dopolon, he renovated the damaged Monastery of Panagia Pelekiti, which was his missionary base of operations. Here also he was rejected, so he went to the Kissavos district and founded a Monastery there in the village of Selitsani dedicated to the Holy Forerunner and Baptist John. Other monks joined him and many visitors soon began to come to the man of God, seeking consolation and edification of soul. 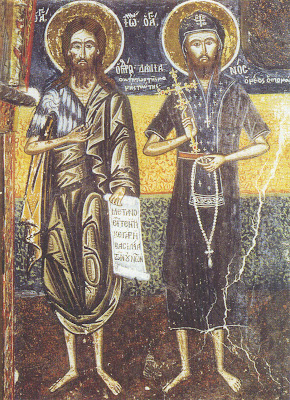 In early 1568, the Saint was arrested by the Turks while he was visiting the village of Bulgarina. He was brought before the governor of Larissa and accused of preventing Christians from working and engaging in business on Sundays, and of exhorting them to remain steadfast in the Faith of Christ. His fellow missionary and martyr Saint Kosmas the Aitolos would be accused of the same thing two centuries later.
After fifteen days on bread and water and with more than a hundred deep wounds all over his body, Damian was again brought before the judge. He proved to be unshakeable in his confession of the Faith and bold in his answers, mocking the specious promises of the judge. The latter was enraged and ordered him to be hanged and his body burnt on February 14, 1568. But having strung the Martyr up, one of the executioners hit him on the head with an axe, breaking the rope and causing him to fall still alive to the ground. Without more ado, the barbarians tossed him into the already-burning fire and afterwards threw his ashes into the River Penea, since the Turks feared the Christians would honor the Holy Martyr. The execution took place in the area of Xylopazaro in Larissa (at the beginning of the road Venizelos, towards the river). 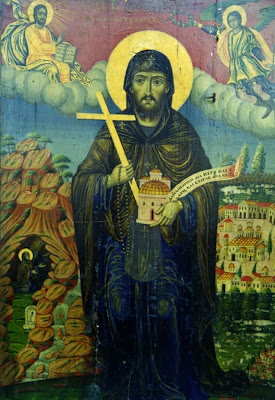 Apolytikion in the Fourth Tone
Rejoice today those in Kissavo Monastery, and let Larissa leap for joy, being gathered at the sacred feast of Damian; come therefore, let us together offer hymns of praise to the Savior through him, and let us praise him, for we are saved through his intercessions.